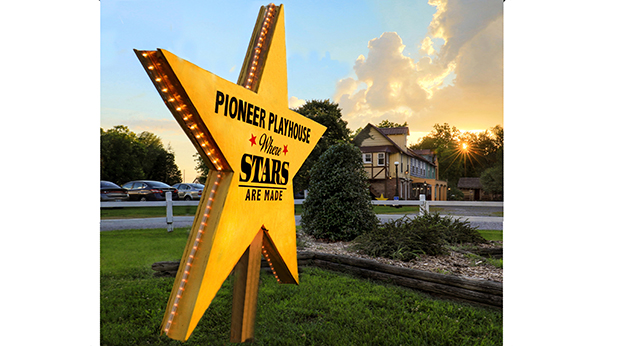 The third and final play of the season at Pioneer Playhouse is Jeeves in Bloom, which runs Tuesday through Saturday, July 27 through Aug. 7.

Taking a quick break from rehearsal, Patricia Hammond and Daniel Hall Kuhn laughed and said they feel like they’re the matriarch and patriarch of the actors at the local dinner theater.

They auditioned together more than 20 years ago to be summer actors for Pioneer Playhouse, and have enjoyed coming to Danville and performing every summer since then.

Hammond, who plays the part of Dahlia Travers in the final show, said they’re enjoying the three-play season, instead of the usual five plays within 10 weeks. “It was hectic. Five was a bit much.” Now, since two of the plays had a three-week run, and the final play is for two weeks, the actors are able to “spend more time on each show which essentially makes for a better production,” she said.

Kuhn, said he acted in the first two productions this summer — Clue on Stage and Southern Fried Funeral. But he’s directing Jeeves in Bloom, something that he’s done several times over the years. He’s even acted in plays that he’s directed, Kuhn said.

Eric Hedlund, who plays the part of Thomas Travers in the upcoming production, is originally from South Dakota but has made his home in New York City for the past eight years. “Stuff is still kind of slow in New York,” where he works as a stagehand, Hedlund said. The effects of the pandemic and closed theaters have caused less tourism.

Describing the Pioneer Playhouse and why he likes acting there, Hedlund said, “This is a nice family business.” He added, “Other places feel like corporate theater, and this feels more like community theater.”

“We love theater and we’re here to have a good time and make great shows.”

Pioneer Playhouse Managing Director Heather Henson said for many years they produced five plays in 10 weeks. “But COVID made us rethink how we do shows.” She and her mother and producer Charlotte Henson, her brother and artistic director Robby Henson, and the board of directors asked themselves, “Do we really want to do that?”

Plus, when planning this season back in November, they didn’t have any idea if the pandemic would be fizzled out by summertime, so they decided to pare down the productions with fewer shows, actors, and technicians.

And the revised schedule is working, Heather Henson said. “We’re thinking about keeping it as the model.”

The final show, Jeeves in Bloom, opens July 27. The play takes place in late June of 1931 in the gardens of Brinkley Court, just outside of Market Snodsbury in Worcestershire, England.

The quiet English countryside will never be the same after Bertie Wooster (Giancarlo Herrera) and his unflappable butler, Jeeves (Silas Waugh), pay a visit. What starts as a plan to play matchmaker for a tongue-tied, newt-loving friend goes hilariously wrong. Soon Bertie is fending off unwanted amorous advances, a bungling burglary, and a homicidal French chef. This show is a delightfully silly and high-energy comedy and is Rated G. It’s adapted by Margaret Raether from the stories of PG Wodehouse.

Even though the play productions end Aug. 7, there are still two weekends of special entertainment planned at the playhouse.

A stand-up comedy weekend, starring Joe Deuce and friends, will be Aug. 13 and 14.

And new this summer, the playhouse will offer a special musical weekend. On Aug. 20, Powerplay will perform a night of rock ‘n roll with horns, playing popular songs from the 60s and 70s.

Then on Aug. 21, Barry Lockard will perform an Elvis Tribute, “channeling the King and paying homage to the Rupp Arena concert that never was.”