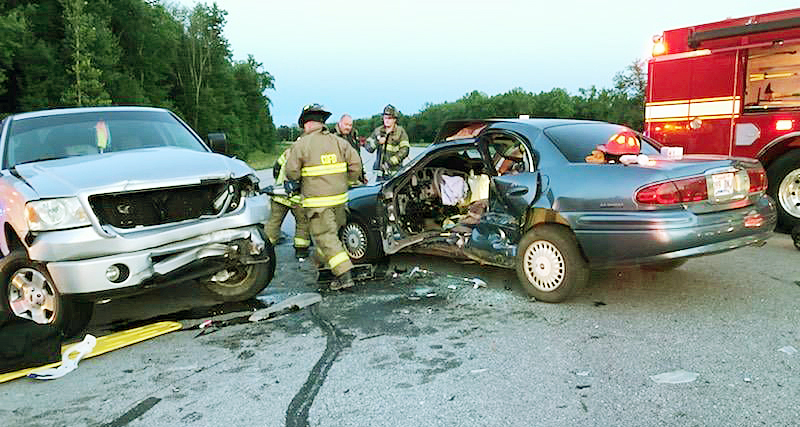 Firefighters respond to the scene of a two-vehicle accident at the intersection of Ky. Hwy. 643 and U.S. Hwy. 150 Friday night. - Photo courtesy of Crab Orchard Fire Department

CRAB ORCHARD – A woman was pronounced dead at the hospital following a two-vehicle collision in Crab Orchard Friday night.
Vicky Boggs, 50, of Crab Orchard was pronounced dead at about 1 a.m. Saturday morning, according to Lincoln County Coroner Farris Marcum.
It was around 8:30 p.m. on July 2 when Boggs was driving a Buick passenger car and turned from Hwy. 643 onto U.S. 150 into the pathway of a Ford pickup truck, according to Lincoln County Sheriff’s Deputies. Boggs’ vehicle was struck in the driver’s side door.
The three other people involved in the accident were injured, according to K9 Sgt. Michael Mullins, but were not in critical condition.
Marcum said Boggs’ daughter was in the vehicle at the time.
Boggs was originally airlifted from the scene by Air Evac in critical condition, according to the coroner.
Crab Orchard Fire Chief Larry Owsley said firefighters had to use the “jaws of life” to extract Boggs from the wrecked vehicle.
“They got her loaded and got in the air and she coded just a few seconds after she got in the air so they flew to Fort Logan Hospital to land,” Marcum said.
Boggs was pronounced dead at the hospital around 1 a.m.
Marcum said he does not suspect alcohol or drug impairment but a routine toxicology exam will be conducted.
Boggs did have her seat belt on at the time of the collision, according to deputies.
The Crab Orchard Fire Department, Crab Orchard Police Department, Lincoln County Fire Department and Lincoln County Sheriff’s Office responded to the accident.
Deputy Daniel Napier is overseeing the investigation.