UK’s White could be one of nation’s top coordinators 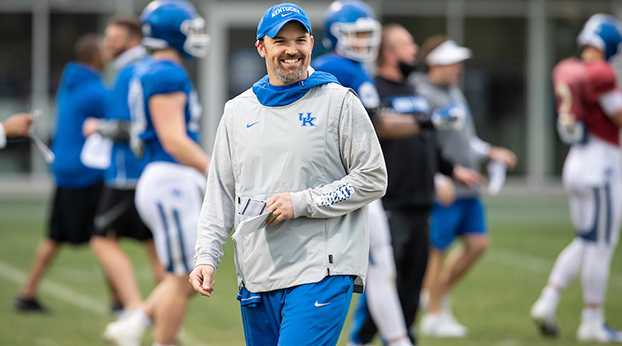 One SEC football coach says UK defensive coordinator Brad White is one of the best coordinators in the nation. (UK Athletics Photo)

Athlon Sports is normally the first magazine to have its college football preview section finished and annually has a review of one Southeastern Conference team where opposing coaches can anonymously off analysis on that team.

This year the team being analyzed was Kentucky and rival coaches had some interesting things to say about the Cats. Here are three of the quotes:

— “A really consistent program, maybe the most steady in our league. They’re smart recruiters, and they have a nice system in place.”

— “Brad White is one of the best coordinators around, and they could be pretty salty. This is their identity. They’re mean, physical, have a really smart secondary, and a great pass rush. They’ll be as good on defense as they’ve been in Mark Stoops’ time there.”

— “Making the change on offense was a big deal for them. Eddie Gran ran a lot of ball control, simple stuff by design to accommodate the defense. They really live and die with the quarterback because they’re just solid but not great anywhere else. The new offense will have more play-action, more of the Rams offense; they’ll run a lot of outside zone and probably not as much between the tackles.”

Athlon predicts UK will finish 7-5 and place fourth in the SEC East behind Georgia, Florida, and Missouri with a spot in the Liberty Bowl against West Virginia.