Washington can run the point and score for UK 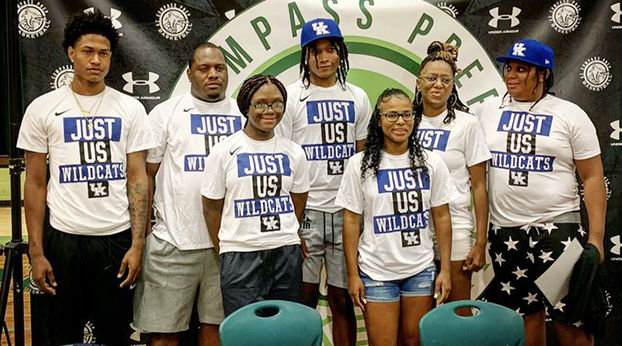 TyTy Washington could be Kentucky's point guard next season but he is versatile enough to play either guard spot according to recruiting analysts. (Arizona Compass Photo)

TyTy Washington is a natural scorer but the 6-4 point guard who signed with Kentucky last week can do a little bit of everything.

“He can truly play both guard spots. His DNA is to score the ball and he does that in a variety of ways. Behind the arc, he is confident and balances that with a pull-up game and floaters and lay-up at the rim. He navigates well in ball screens because he can read his man, the coverage, and the help-side and make the right play,” ESPN national scouting director Paul Biancardi said.

“His decision-making is strong as is his leadership ability. He is not afraid to hold others accountable nor does he mind being held accountable by others.”

That’s the kind of point guard presence UK lacked last season when it went 9-16 and now hopefully has for next season with Washington, a player who made a dramatic rise in the recruiting rankings his senior season at Arizona Compass Prep.

“I like that he can do a number of things. In the GEICO Nationals he had the ball in his hands a lot because he had to carry the team offensively. At the Iverson Classic, he got the ball out of his hands quickly and threw ahead. The ball didn’t stick in his hands,” Rivals.com recruiting writer David Sisk said.

“He is a prolific outside shooter with a beautiful and natural stroke. He also sees the floor well and appears to be an excellent passer. In a nutshell, it looks like he does a lot of things well.”

Washington can run the point and/or score.

Sisk said in the GEICO national championship he had assists off the dribble. At the Iverson Classic, he had several assists off quick passes in the open court.

“He looks to me like a smooth point guard who is an excellent outside shooter as well as a good passer,” Sisk said. “I think he would be fine in (John) Calipari’s system because he is an obvious upgrade over what they had at the point last year. I definitely think he is one of the top three guards in 2021, which means he’s talented.

“It still remains to be seen how effective he would be a late shot clock situation with the pending high ball screen. But if he were to be on the floor with CJ Fredrick, Dontaie Allen, Kellan Grady, and even perhaps Davion Mintz, then you all of a sudden have a cast of very good shooters on the floor.”