Kowalik battles out of a ‘slump,’ finishes season with .509 average 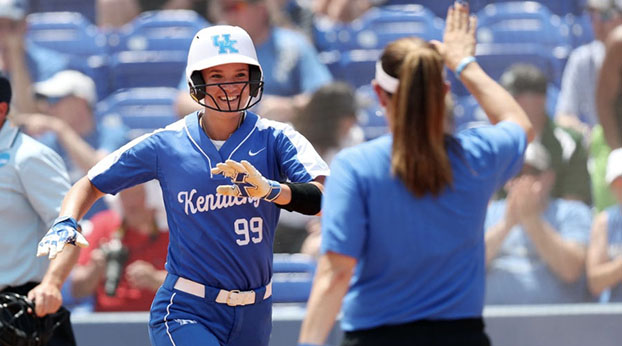 A Kowalik slump is not an ordinary slump. It’s more like getting only one hit a game instead of two or three or maybe even going a game without a hit. Still, she became the first player in UK softball history to finish a full regular season with a .500 batting average.

Even though her average dropped 30 points the last few weeks, she still hit .509 to easily break the school record of .442 set by Nikki Jones in 2002.

Lawson noted teams had accumulated more tape late in the season on Kowalik to spot her tendencies.

“For her to continue to get hits and stay above .500 is really cool,” Lawson said. “She has done this against the best pitchers in the country in the SEC. The SEC has a very unbalanced schedule. We have played the majority of the top teams in the SEC and Kayla has still done what she has done. I love watching her bat. I think she will continue to do well.”

Kowalik leads the nation with 89 hits in 50 games going into this week’s Southeastern Conference Tournament. She also has a team-high 72 runs scored and 19 stolen bases in 21 tries. Kowalik has driven in 35 runs, hit 12 homers, and tripled six times.

Lawson predicted before the season started that Kowalik could be the best leadoff hitter she’s ever had — and now she is.

“The reason I knew she could be one of the best players is that she is incredibly steady,” the UK coach said. “She’s very realistic and has a good grasp of reality.”

Lawson can remember games where Kowalik did not look in her first at-bat and a year ago that would have stayed with her the rest of the game.

“This year she would bounce back,” Lawson said. “She is tough. That is why she is who she is.”