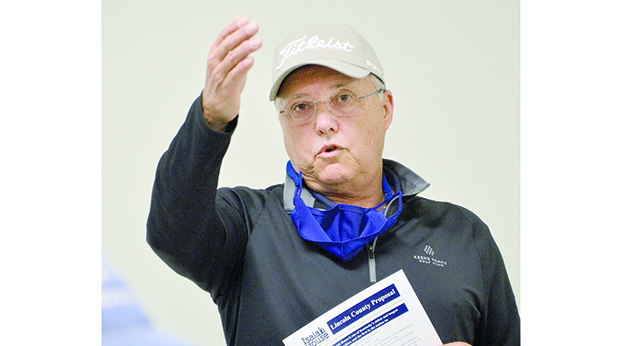 Lincoln County resident Robert Rankin speaks against locating a residential drug treatment facility in a house on U.S. 150 during last week’s Board of Adjustments public hearing. - Photo by Robin Hart

Property owners who would live adjacent to, or near, two proposed residential drug treatment facilities voiced their strong discontent about the projects and their locations at the Lincoln County Board of Adjustments public hearings last week.

The board ultimately didn’t make a decision and extended the hearings to its next meeting on June 2 at the Veterans Park community building so that more people could express their support or displeasure about locating drug treatment facilities in their neighborhoods.

The Isaiah House’s conditional use proposal for this house is to turn it into a 16-bed treatment center, according to a paper handed out at the public hearing by Isaiah House CEO Mark LaPalme.

The Isaiah House is requesting permission to convert it into a 26-bed treatment center and working farm.

Attorney for the Planning and Zoning Board of Adjustments Jeff Ralston explained that conditional use permits are approved annually, and can be revoked if the applicant doesn’t adhere to specific conditions. The hearings were not for a zone change, which would be a change to the zoning ordinance and would not require a person or business to request permission from the board of adjustments to conduct business on the property.

In his opening remarks to the crowd who filled the Veterans Park community center, LaPalme said, “All of the programs that we want to do in Lincoln County are going to be for women and most likely pregnant women.” 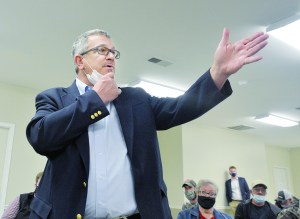 Founder and CEO of Isaiah House treatment centers Mark LaPalme defends his conditional use permit request for two houses in Lincoln County to be converted into residential drug treatment homes for women during last week’s Planning and Zoning Board of Adjustments hearing. – Photo by Robin Hart

“There’s very little in the area of providing pregnant women the opportunity to seek treatment. So one of these will definitely be a pregnant women’s center. The other one will be a women’s program. Most likely, eventually, they will be pre-and post-pregnancy, so eventually once they start having their babies, then we can maybe go to the farm, the larger property, and utilize the farm as a place to house them and their children.” LaPalme said.

He also said the Isaiah House was planning on investing a total of $2.3 million in four projects in Lincoln, including the two residential treatment homes being discussed at the public hearing.

The additional projects that Isaiah House is developing include a transitional home for women at 130 Austin Drive in Hustonville; and locating Reliance Works LLC to a commercial building at 6732 U.S. 127 in Stanford. Reliance Works, owned and operated by Isaiah House, is a lawn care and landscaping, sheet metal, and construction/renovation business with potential plans to launch a sales and rental business.

After LaPalme stated estimates of what Isaiah House’s economic impact would have on Lincoln County he said, “I’d like to address two more things. We do studies on two things. Number one is property values. Everywhere we are, the property values have increased.”

After many in the crowd snickered at his statement, LaPalme said, “You can laugh guys, but it’s true. … Every one of them, anywhere around our properties, the property values have increased.”

He added, “Not only that, the crime rates have gone down. Everywhere we are around. It’s just a fact. We have numbers to support that.”

A member of the audience said, “I’m not against you. I want to know all the facts. We want proof.” LaPalme agreed to send the figures to the Board of Adjustments which would be shared with the public at the next hearing in June.

Many in the audience acknowledged the need for drug treatment facilities to help people battling addictions and thanked LaPalme for his “mission.” However, they believe having them located in an agricultural area, far from a hospital, especially when pregnant drug addicts are involved, was a bad plan.

Scott Ferguson said, “I believe in drug rehabilitation. I believe we have a problem in this country and we have to work on it. But you’re type of facility needs to be in a municipal setting because you’re going to require 911 calls, police, rescue squad, that will be coming to your facilities. You need to be located in the city limits.”

LaPalme replied, “We have a full, complete, well-trained licensed medical staff from nurse practitioners to RNs, and that they are all trained to handle pregnancies that involve a drug-addicted mother. He also said there would be equipment on hand that is required by the state to be licensed.

Another resident who lives nearby commented about the 16-bed facility that’s being planned for the home on U.S. 150. “As I recall, that’s a three-bedroom, two-bath. Sounds to me like you’re going to stack them up like cordwood.”

LaPalme answered, “No sir. The building inspector will give occupancy based on size of the building. We’ll start with whatever it is that they recommend. And then we’ll add on to the property, possibly to make it 16 beds.”

“Small renovation to the current house, yes,” LaPalme said, and the septic system would be altered too, he added.

Tiffany and Josh Hale, who are selling the property at 4565 U.S. 150 spoke up in support of The Isaiah House’s plans. Josh Hale explained that they can not discriminate against a potential buyer. Tiffany Hale said she was “very thankful” for Isaiah House’s residential facility in Lexington because of her sister’s success with the program. “She is four months sober. … If not for Isaiah House she probably would be dead.”

“Let’s not lose focus on why we’re here today. We all want people to be rehabilitated from drugs. We’re here about the location where they want to put this government-funded drug house.”

Many also voiced their concerns about their families’ and neighbors’ safety. They said most of the women living at these facilities have been arrested on drug charges and are there only because of court orders, but they still could just walk away.

But if they wanted to leave, the Isaiah House would provide them transportation, he said.

A father in the crowd said his home is near the proposed facility and that he has three children. He asked LaPalme, “There’s nothing that you can do to prevent walk-offs at any point?”

“No,” he said, but later said there would be alarms on the doors and windows and that the staff would be alerted if someone did leave the home. Then he added, “This place is going to be staffed with more staff than clients. It would be impossible for somebody to walk off and us not know it. It’s alarmed. … It’s a secure facility. They’re not just going to walk off.”

Plus, he said, “Men and women are different.”

A man in the audience asked if the home would ever be converted to a residential drug treatment center for men. “It will never be male, no sir,” LaPalme said.

Then he was asked if there was anything to prevent it from becoming a center for men. LaPalme replied, “Nothing.”

Ferguson said he lives on a lane less than one-half mile away from the proposed facility on U.S. 150. “We’ve had a drug house at the end of our lane. My home was robbed twice. I really don’t know if it was a pregnant woman that stole my items out of my house or if it was a man. The proposal that you all have a drug house right up from my home, it’s a government-funded drug house. The thing that the drug house at the end of my lane has in common with your drug house, it’s the same customers. They’re all drug addicts.”

Concerning the 160-acre property on Ky. 1770, LaPalme said in addition to housing more females in the home, he plans on them “working the farm” to raise meat and vegetables.

Charelene Russell, who is selling the property said, “I am very happy the women of Lincoln County will be helped. The neighbors don’t have anything to worry about with those women being out there.”

In addition to more safety concerns about having a residential drug treatment facility in the area, a woman who recently moved on Ky. 1770 from a city said, “It would have been an automatic deal-breaker,” if they had known a treatment center would be on their road out in the country. “It’s an invasion of our neighborhood,” she said.

Another resident said their property values would be impacted, negatively. “You’d be silly if you say it’s not impacted. … Logic says … property values will decline,” and he wouldn’t have bought his farm in the area if he had known a drug treatment center would move in nearby.

Near the end of the two-hour hearing, one man said, “I think there’s another solution to this problem. We’ve got other options,” then he requested the Board of Adjustments to deny both conditional use permits for the locations that were discussed.

The second public hearing for the same locations will be 1 p.m., June 2 at the Veterans Park community center building.