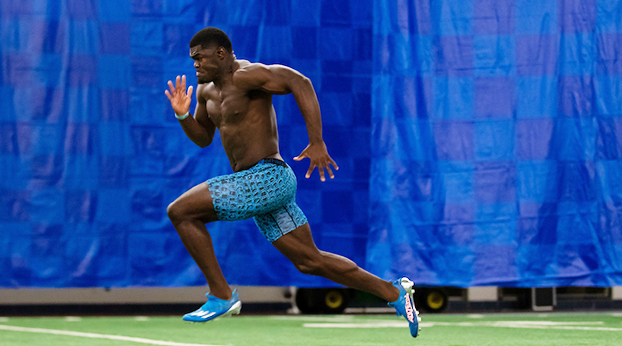 Linebacker Jamin Davis will get a four-year deal worth almost $14 million after Washington made him the 19th pick in the NFL Draft. (UK Athletics Photo)

That made Davis just the sixth UK defensive player ever drafted in the top 20. The others were Bob Gain, fifth, 1951; Lou Michaels, fourth, 1958; Art

It’s going to pay off in a big way, too. He’s in line for a four-year contract worth almost $14 million including a $7.4 million signing bonus. All his money is fully guaranteed with a fifth-year option available for the team.

A lot of NFL draft analysts gave high marks to Washington for picking Davis. Here’s what some noted:
• Brent Sobleski, Bleacher Report — “Kentucky linebacker Jamin Davis is the type of prospect scouts dream about when they evaluate the position. Davis’s athletic traits are nearly off the charts.
“First, he’s built exactly how the position should look with a chiseled 6-4, 234-pound frame. At Kentucky’s Pro Day, the linebacker’s 40-yard-dash times ranged from 4.37 seconds to 4.49, according to reports. Either way, he can fly. To further prove that point, he posted an outstanding 42-inch vertical jump and 11-foot broad jump.
“The workout numbers show how explosive Davis is. It falls on his next position coach to fully realize his potential.”

• Pete Prisco, CBS Sports — “Washington’s defense just got better. This is one of my favorite picks of the draft. He will be a special player on a talented front seven.”

• Chad Reuter, NFL.com — “Davis’ athleticism won over the Washington Football Team. He is able to cover a lot of ground in space and tracks down ball-carriers with intensity.”

• Sheil Kapadia, The Athletic — “(Washington coach) Ron Rivera knows linebackers, and he got a good-looking prospect in Davis (6-foot-4, 234 pounds). Davis should fit well as a run-and-chase linebacker in Washington’s zone-heavy scheme. He has elite athletic traits and gives Washington another talented player in its front seven.”

• Ben Rolfe, Pro Football Network: They had their choice of several defensive options, and they took a chance in selecting Jamin Davis. Although there is uncertainty surrounding Davis, his upside is huge. That upside means he is yet another of the A grades in Round 1 of the 2021 NFL Draft.”

• Rob Rang, FOX Sports — “A former no-nonsense linebacker himself, Ron Rivera knows the position as well as anyone. Davis entered the year barely a blip on the radar of most scouts, but his stock soared for the Wildcats last season, and his potential is sky-high. The selection fills a clear need for Washington, especially given all of the stellar running backs in the NFC East.”

Kentucky recruiting coordinator Vince Marrow remembers a 6-3, 205-pound Davis coming to UK as a freshman and watching him blossom physically and mentally at UK.

“If anybody said they thought he would be a first-round draft pick when he got here they would be lying. I thought he was an NFL prospect. He was a guy that was not selfish and waited his time. He played special teams and then he started getting playing time and just took off. I think he will have a big-time NFL career.”

Former UK star Bowden returning to Somerset for another…