How good is UK commit Goodwin? 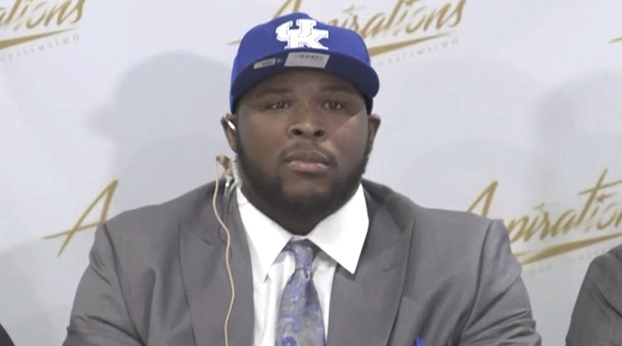 Just how good is offensive tackle Kiyaunta Goodwin of Charlestown, Ind., a top 100 prospect, who verbally committed to Kentucky Saturday?

Steve Wiltfong, director of recruiting for 247Sports, said Goodwin is a potential top 10 NFL draft pick because he can run the 40-yard dash in 4.9 seconds, finish the shuttle run in 4.5 seconds, and bench press 225 pounds 29 times — numbers that NFL draft picks like to have.

However, Goodwin’s long-time mentor, Chris Vaughn of Aspirations Fitness in Louisville, has even higher expectations for the 6-7, 290-pound Goodwin.

“I think he can be the No. 1 pick in the draft if he stays the course and keeps working hard. He’s been around a lot of guys that play at a high level,” Vaughn, a former football player at Notre Dame and Louisville, said. “His numbers are unreal. He repped 225 29 times You are talking kids drafted in the first round doing that and he’s doing that as a 17-year-old. He’s just been blessed genetically with a lot of gifts. That’s why I say the sky’s the limit for him.”

Goodwin, a Louisville native, had Alabama, Clemson, Ohio State, and Michigan State in his top five along with Kentucky — the first school to offer him a scholarship when he was a seventh-grader. He said UK head coach Mark Stoops and recruiting coordinator Vince Marrow never wavered in their support even when gained over 100 pounds in high school to put his weight over 400 pounds.

“I was a guy not even that coordinated back then and yet Kentucky still offered me and never quit believing in me even when I gained weight and it looked like I might not even play college football,” Goodwin said. “The love never changed. I feel like they have a great fan base. I am from Kentucky and always wanted to play for my home state.”

Vaughn said the “genuine” approach Marrow took with Goodwin made a lasting impression on the player. Vaughn said while Marrow recruited him as a player he also found a way to get to know Goodwin.

“When Kiyaunta was 400 pounds coach Marrow was always motivating him to drop weight when a lot of other schools were backing off. Kiyaunta liked that he had an interest in him outside of just football and he found a way to help motivate Kiyaunta to drop weight.”

Vaughn calls Goodwin an “old soul” who can be charismatic but also very methodical in his thought process. He also said being so big at a young age made Goodwin a bit passive at times.

“It takes a while to turn that aggression on when you are a lot bigger than everybody else. I knew when that switch got turned on, he could be as good as he wanted to be,” Vaughn said. “For a long time (in high school) he was too heavy to catch anybody off the line of scrimmage and was just trying to save energy to play another play. Now he’s full of energy and moves so much better after dropping that weight.”

Goodwin grew up watching more NFL games than college games but he knew about the Big Blue Wall built at UK by the late John Schlarman. He likes what new offensive line coach Eric Wolford has done since arriving at UK in January.

“They have a really good offensive line,” Goodwin said. “I loved coach Schlarman but I am very satisfied with his replacement. I have a great relationship with him and that’s very important.”

UK’s Lilley is SEC player of the year