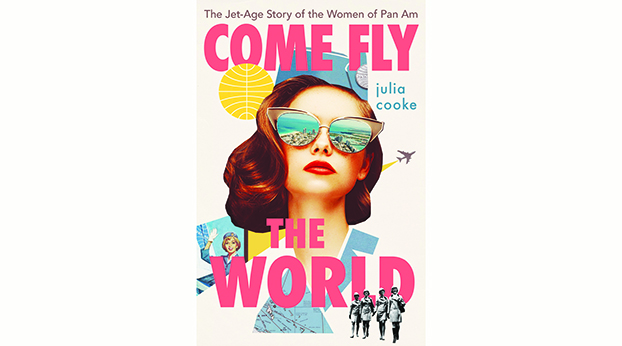 “Come Fly the World: The Jet-Age Story of the Women of Pan Am” by Julia Cooke

Table trays in the upright position.

You aren’t getting off the tarmac until that happens. Also, pay attention: there are lights down the aisle along the floor, and exits above each wing. Masks will drop down, in case of loss of oxygen; put your mask on before assisting others. In “Come Fly the World” by Julia Cooke, you’re in for a trip back in time.

Lynne Totten had a biology degree, but she saw the future and it wasn’t good.

It was the mid-1960s and women with a degree like hers might work as an assistant or a teacher, but never as someone in charge of a laboratory. As a voracious newspaper reader, though, Lynne eventually realized that there was “a whole world out there” that she could explore and get paid for it. She set aside biology and became a stewardess.

Karen Walker was an experienced traveler when she signed up to work at Pan Am at the advanced age of twenty-six, which was at the top of the age-limit for stewardesses; they also had height limits and regular weigh-ins, regulation hair styles, and mandatory attendance at make-up classes in stewardess school in Miami. Foremost, stewardesses at Pan Am and most other airlines then were required to be unmarried.

Hazel Bowie of Mankato, Minnesota, took advantage of new airline rules: as a Black woman, Pan Am’s reach for diversity fit her career goals. Clare Christiansen had volunteered for duty on a shuttle service to and from Vietnam that Pan Am offered through the U.S. Government; such assignments were another step on a carefully-planned career ladder. Torild “Tori” Werner, who grew up in Oslo, Norway, likewise set her sights on management but first, she also volunteered for similar shuttle duty for U.S. soldiers arriving and departing from Vietnam.

And in the spring of 1975, three of these women went to Vietnam for one final time…

If you separate “Come Fly the World” into two different camps – which may be difficult, since the book as a whole is pretty excellent – you’ll see that there really are two parts to it: the story of five women at Pan Am, and the story of women in the 1960s.

On one hand, author Julia Cooke tells the tales of Lynne, Karen, Clare, Tori, and Hazel, why they decided to become stewardesses (a word that fits the timeframe) and what their experiences were on the job. In addition to those anecdotes, most of Cooke’s subjects seized adventure and cheap off-duty travel, which also gives this book a hint of travelogue but with less romance and more practicality. Then there’s the trip back to the years 1965 to 1975, the crazy music; the wild clothes; and the lawsuits brought to give women the right to get a credit card, hold a job while married, and to work while pregnant.

Be aware that there’s no Coffee, Tea, or Me? in this book; instead, it’s Mad Men meets a glass ceiling, and destroys it. So grab “Come Fly the World” and buckle in.

The Bookworm is Terri Schlichenmeyer. Terri has been reading since she was 3 years old and she never goes anywhere without a book. She lives on a farm with two dogs, one patient man, and 17,000 books.