Alexia Baldock lunges for the loose ball. Baldock led the team in scoring with 11 points. - Photo by Clinton Riddle

Lincoln County’s road trip to Madison Central on Saturday paid off after a tough defensive battle from both sides, with the Lady Patriots holding on to edge the home team, 33-32. 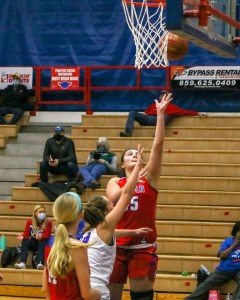 The Lady Patriots (4-10) broke a three-game losing streak and picked up their second win of February. Alexia Baldock led the scoring with 11 points, closely followed by Emily Estes with 10. Chloe Ralston scored six in the game, with Makayla Greer scoring four and Katie Carmicle-Shields finishing with two.

It was a battle of defenses from the beginning, with both Lincoln County and Madison Central struggling for control of the ball. Neither team entered double-digit scoring until the second quarter. Indeed, the Lady Indians led after first-quarter play, 7-6. In the second quarter, the two teams combined to score only eight points, with Lincoln leading at halftime, 12-9.

Coach Brandon Fisher praised his team’s tenacity and aggressiveness in the close win.

“Well, I think the game was sort of ‘nip and tuck’, back and forth. Both teams are struggling a little bit. They’re both young teams. And that win means a lot to either team,” he said of his overall impressions of the game.

The Lady Patriots played an aggressive zone defense, pressuring the Lady Indians to the periphery and running a corner trap to force turnovers.

Lincoln was hurt by a 1-13 performance from three-point range, and hit only 36.4% of their foul shots (4-11), but control of the paint and baseline contributed heavily to Madison Central’s 27.7% shooting, while Ralston and Estes were a notably strong defensive presence under the basket. Ralston led the team with eight rebounds, followed by Baldock with six. Estes and Carmicle-Shields each finished with five. Greer had three boards on the night, with Hallie Mullins and Elly Sims each finishing with one.

“So we’re scrapping and clawing for everything we got, at the end,” Coach Fisher continued, “and if we hit some free throws, we might could have sealed just a tad bit earlier. But I think we’re two very comparable teams, and I think it was a big win for us.”

Fisher also spoke of the benefit of winning a game that he knew was going to be a tough match-up.

“It’s also a big emotional win, especially against a team that could have gone either way.”

The Lady Patriots were seemingly physically outmatched against Madison Central in the early minutes of the game, but became notably more aggressive shortly before halftime and kept up the pace throughout the remainder of the game.

“I think, defensively in several games, we may have won a couple more if we would have got back in transition and not gave up layups, and not gave up second and third and fourth shots. So we’ve really been emphasizing to step to our man (in coverage), go jump, secure the rebound. Offensively, same thing,” Fisher continued, discussing the importance of offensive rebounds and second-chance shots.

“So it’s important that we send four to the glass, and try to get those second and third opportunities.”

While Lincoln was outscored in the second half, 23-21, Fisher credits the team’s switch to a half-court trap defense to helping to secure the one-point win.

“I was talking to the team in the huddle, and I said, ‘Well, you gotta dance with the one who brought you’,” in reference to the team’s second-half switch.

Speaking about his approach to building up the team’s overall approach to the game, Fisher stated the need for ball control and minimizing turnovers, as well.

“Here’s our philosophy: if you can defend and rebound, and take care of the ball, and not turn it over, you’ve got an outside chance of winning the game,” he summarized.

Lincoln is next scheduled to play the undefeated Paul Laurence Dunbar (10-0) at home on the Saturday, Feb. 20.

John Calipari could sense a turnaround on the horizon. Despite improvement behind the scenes during the past three weeks, the... read more