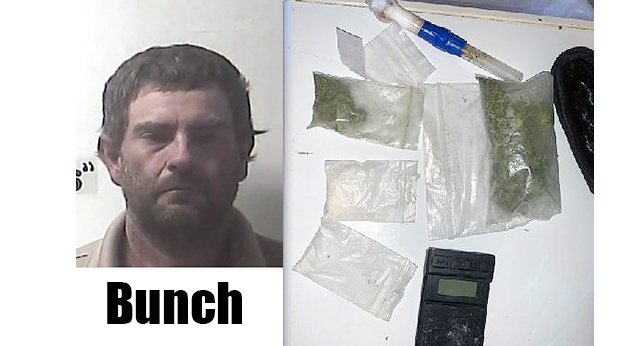 An ongoing narcotics investigation at a garage in Waynesburg landed one man behind bars, according to the Lincoln County Sheriff’s Office.
Billy Bunch, 42, of Waynesburg, was arrested on Jan. 23 following the execution of a search warrant at a garage on Ky. Hwy. 1247, Loop 3.
According to K9 Deputy Michael Mullins, the search warrant was executed at about 6:45 a.m. on Jan. 23.
During the search, deputies allegedly located approximately nine grams of methamphetamine and 15 grams of marijuana.
Deputies also found digitals scales and other drug paraphernalia.
Mullins, the case officer, was assisted in the arrest by Deputies Harness, Coleman, Cloyd and Brummett, as well as by Constables Eddie Brown and Delbert Mitchell.
Bunch was arrested and charged with trafficking in a controlled substance (methamphetamine); possession of drug paraphernalia; and possession of marijuana.
As of Monday, Bunch remained lodged in the Lincoln County Regional Jail. His bond was set at $25,000.