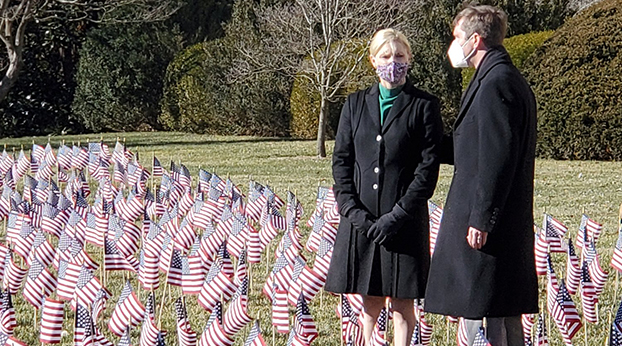 Gov. Andy Beshear and wife Britainy outside the Capitol where more than 3,000 flags were placed representing Kentuckians who have died. - Photo by Tom Latek / Kentucky Today

Gov. Andy Beshear said Kentucky has seen a drop in the number of new cases of COVID-19, a trend he hopes continues.

“For the second straight week, we had a decline,” he said during a Monday press briefing.  “Remember, it was roughly three weeks ago that we had our biggest bump?  That was a post-holiday gathering bump.  We know more people got together during that period of time.  The question was, after that, would we get a large number of people back to wearing masks and avoiding those gatherings?  The answer appears to be yes, as we have two straight weeks of declines.”

He said he believes the steps taken through mid-December blunted the worst of the worst, although cases are still too high.

“We believe this decline is real,” Beshear said. “It’s not just a result of testing numbers, because our positivity rate continues to decline.”

A total of 1,268 new cases were reported to state public health officials on Monday, bringing Kentucky’s pandemic total to 347,836.

“While Mondays are typically the lowest day of the week, we have the lowest number of new cases in the last four weeks,” he said.  “I remember when that number would have been staggering.  But compared to the number of cases that we have had, it’s a good sign.”

Kentucky’s positivity rate dropped to 9.93% on Monday, the lowest it’s been since Dec. 31, shortly before the post-holiday spike began.

A total of 1,539 Kentuckians were hospitalized with the coronavirus.  Of them, 374 were in the ICU and 203 on a ventilator, all decreases since Sunday.

“We are still experiencing the number of deaths which correlates with the post-holiday surge,” Beshear pointed out.  “Remember, they trail a month or so behind when we see a large number of cases.  So our hope is as we see cases decline, we will see a decline in those we are losing.”

Thirty-nine more deaths were reported Monday, making it 3,460 in Kentucky since the first death in late March 2020.

The latest victims ranged in age from 50 to 98.  Crittenden County had six; Christian, Fayette and Simpson counties each had three; Clay, Jefferson, Madison and Warren counties had two; and there was one in Barren, Bath, Calloway, Edmonson, Floyd, Graves, Greenup, Hart, Hopkins, Livingston, Lyon, Mercer, Metcalfe, Monroe, Rowan, and Washington counties.

The governor said they will continue to add small American flags to the display outside the State Capitol, in memory of each of those who have lost their lives to the coronavirus.

Cubbage said there have been 1,542,008 unemployment claims, including duplicates, filed in Kentucky since the beginning of the pandemic. There are 40,748 pending claims with no fraud or identity issues. In total, there are approximately 665,000 unique claims representing about 600,000 claimants.

Cubbage said if claimants payments are delayed because they had to set up a new Pandemic Unemployment Assistance (PUA) claim, they will still get $300 for all the weeks they qualify for PUA.

“Office of Unemployment Insurance (OUI) programmers are working on programming for how PUA claimants with backdated weeks claim those weeks in an expedited manner, and I’ll have an update regarding how that programming in our next update,” Cubbage said.

“We have received questions about the amounts listed on the 1099s our 2020 claimants are receiving. Multiple claimants have been confused by the total compensation amounts listed in box 1,” Cubbage added. “Please note that the amount listed on box 1 is the pre-tax amount of compensation you were entitled to. If you chose to have income tax withheld, the amounts you received either through a direct deposit or on your prepaid card will be after-tax amounts. Kentuckians with questions on this topic can email KYOU1099@ky.gov, starting Tuesday.”

She announced that for those still receiving payments on a debit card, payments to that card will end this week. “You will have until the end of February to spend any balance on that card. If you do not update your profile with a bank account before your next payment issues after the end of the debit card program, you will get a paper check. Please make sure we have your accurate mailing address uploaded if you will be getting a paper check. For new claimants who filed after Jan. 1, 2021, you should have only had the option for a direct deposit or paper check. This only affects those who chose a prepaid card prior during 2020.”

Cubbage also warned about an uptick in fraudulent claims.  “If you receive a letter from OUI regarding a claim for yourself or one of your employees and you or the employee did not file a claim, please email UIFraud@ky.gov, and we will flag the claim and make sure nothing is paid.  If you are concerned about identity theft, please check out the resources on the Kentucky Attorney General’s website.”

To see the full daily COVID-19 report for Kentucky, which includes such information as the red zone counties and red zone recommendations, testing locations, the weekly White House Coronavirus Task Force reports for Kentucky, executive orders, vaccine distribution, and other information on the state’s pandemic response, go to kycovid19.ky.gov.

Gov. Beshear’s next scheduled live press briefing will be Wednesday afternoon at 4.  He is expected to have more information on regional COVID-19 vaccination sites on Thursday.