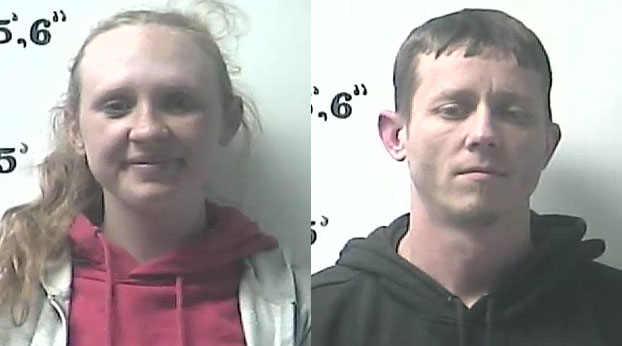 A woman was arrested on drug-trafficking charges after Lincoln County Sheriff’s Deputies allegedly found her in possession of drug paraphernalia, as well as a check from a man who is reportedly deceased.

It was Jan. 18 at about 8:27 p.m. when K9 Deputy Michael Mullins stopped a 2005 Chevrolet Impala on Goshen Road to verify proof of insurance.

“Vehicle rear license plate was hanging on by wires and sideways, also was flopping in the wind,” the arrest citation states.

Amber Cooper, 21, of Stanford, was driving the vehicle and the passenger, Matt Underwood, 33, of Lancaster, had active arrest warrants, according to the citation.

K9 Luma was deployed and alerted to the passenger and driver side of the vehicle.

Cooper told deputies she had scales in her backpack, according to the citation, and after searching the vehicle they located digital scales with white residue, empty baggies, and a notebook.

Deputies also found a check dated Jan. 17, 2021 that belonged to a Ralph Clark, who was reported deceased.

During the search, Cooper “produced a baggy” with approximately nine grams of a white, crystal substance, which she allegedly told deputies was methamphetamine.

“Above stated the meth was hers, that she was going to cash the check for someone else,” the citation states.

Cooper was arrested and charged with trafficking in a controlled substance (methamphetamine); possession of drug paraphernalia; failure to produce insurance card and license plate not eligible.

Underwood was also arrested on active warrants in Garrard County.

Mullins was assisted in the arrest by Deputies Phillips, Taylor and Harness, as well as Constable Brown.

Gas prices on the rise in Kentucky

Gasoline prices in Kentucky have risen 2.4 cents per gallon in the past week, averaging $2.21/g yesterday, according to GasBuddy’s... read more