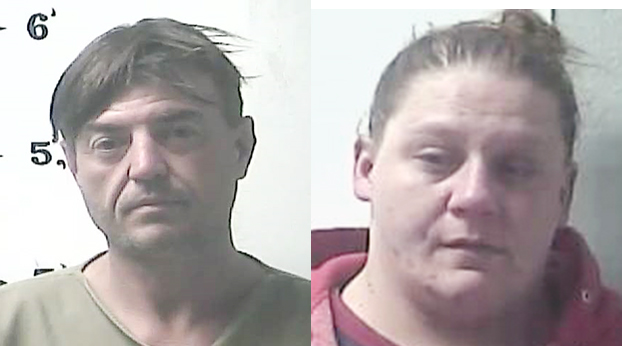 WAYNESBURG – A woman and a man wanted on multiple indictment warrants were arrested after attempting to flee Lincoln County Sheriff’s Deputies during a traffic stop.

At about 12:07 a.m. on Jan. 12 K9 Deputy Michael Mullins observed a 2006 Saturn pull into Ruckels Gas Station after hours and then leave.

While leaving, Mullins observed the vehicle did not have the rear license plate illuminated.

The vehicle continued traveling at about 45-55 miles per hour on Ky. 1247 before turning onto Jacobs Loop Road.

According to Mullins, the vehicle was operating in the middle of the roadway before it turned into a residence on Jacobs Loop Road, continued through the yard and came to a stop in the backyard .

Mullins ordered the driver, identified as Amber Moore, 41, of Waynesburg, out of the vehicle.
“…she refused, remained hysterical, was removed and placed into custody,” the citation states.

Moore told deputies that the passenger, Michael G. Coy, 42, of Waynesburg, “told her not to stop,” according to the citation.

A woman was arrested on drug-trafficking charges after Lincoln County Sheriff’s Deputies allegedly found her in possession of drug paraphernalia,... read more