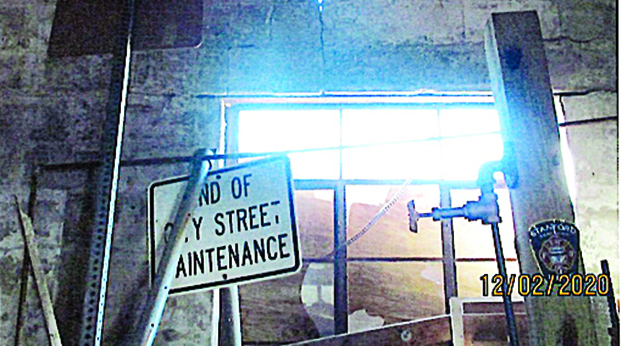 Photos provided to the Stanford City Council show the damaged interior walls of the Street Department storage building, which the council has voted to demolish. - Photo courtesy of the city of Stanford

After having the property reviewed by an architect, Stanford Mayor Dalton Miller told City Council members last week that the cost of repairing the Street Department storage building will cost more than the value of the building.

The building is attached to the Old City Jail on Main Street in Stanford and has several structural issues, according to an assessment by Architect Garlan Vanhook.

In a letter to the City Council, Vanhook described the damage the building has sustained over time, and his opinion on the structural stability of the building.

“This storage section of the block structure has developed some significant signs of movement and shifting of the exterior CMU walls,” Vanhook said. “The south end wall/southeast corner/and southwest corners all show evidence of bowing walls and mortar joint cracks opening up in several areas of these walls.”

Vanhook also notes that the roof was “likely not properly anchored back to the tops of the unreinforced CMU walls.”

“This lack of sufficient anchors at the top course of the block, along with the height of the wall with no vertical reinforcement is letting the wall shift and bulge over time,” he said.

“The wall is starting to push out. the cost of repair is more than the value of the building,” Miller said Thursday night.

Miller said he spoke to two contractors and one gave a quote for $3,500 to tear the building down and haul off the debris.

The other said he could not complete the work.

“That $3,500 is if the roof is removed because he’s trying to avoid the landfill bill and there is someone that is willing to sign a waiver of liability with the city and they will deconstruct the roof for the material,” Miller said.

There is a wall between the old jail and the storage building, Miller said, that would be altered.

“When Garlan came and looked at it he said we will cut it and leave a wing wall sticking out and that way it will help preserve the wall against the jail,” Miller said.

Miller said about 90 percent of the building is concrete.

“So there’s very little that will have to go into a dumpster or landfill,” he said.
Council member Ronnie Deatherage asked how soon the demolition would occur.

“As soon as possible,” Miller said. “The wall is actually buckling convex.”

“Obviously it needs to be done,” Deatherage said as he made a motion to demolish the structure.

The motion was seconded by Council Member Ella Curlis.

The City Council voted unanimously to demolish the building.

In other business
• During the “citizens’ comments” portion of the meeting, a citizen asked: “Have there been any other proposals for fixing the drain water on Sherwood?”
Miller said he has not heard anything recently from AGE on that, or the proposal for concrete.
“I can’t remember the exact dollar figure but one of the proposals was to basically put a rock wall with rick-rack rock there and they also wanted to look at the possibility of pouring concrete and when AGE looked at that it was not something that was figured in. They’re looking at that. In that last two weeks no plans have come in,” Miller said. “They said probably spring before anything would come in; nobody is going to bid a concrete job in the middle of winter.”

• Council member Sara Givens asked if the city will be hosting any type of Christmas event this year.
“I can’t answer that until the Governor releases his restrictions or eases the restrictions after Dec. 13,” Miller said.
“We are still going to have a Christmas dinner for city employees and the council but it may be in January,” he added. “We just don’t know what day.”

• voted to declare a 2009 Ford Crown Victoria as surplus property. Miller said the city, which has received several cars by donation over time, can then donate the car to the Perryville Police Department.
“If we surplus this we are wanting to donate it to the city of Perryville who has a full-time officer and two part-time and only two cars. They’re in dire need of a car,” Miller said.

• Miller thanked Council Member Ella Curlis for her two years of service on the city council.
“It’s been fun, Ella Mae,” Miller said. “We haven’t always agreed, but you know what, at the end of it we leave that behind us and we move on.”
Miller also thanked Peggy Hester for serving six years on the city council.

“The coronavirus pandemic and its associated lockdowns, prolonged unemployment, social isolation, and general uncertainty appear to have contributed to a... read more