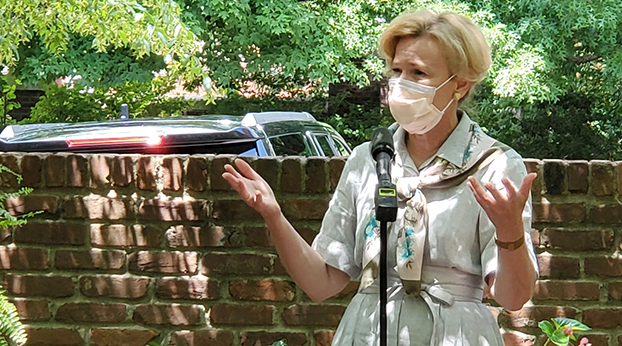 Dr. Deborah Brix speaks with reporters at the garden in the Old Mansion in Frankfort. - Photo by Tom Latek/Kentucky Today

Pandemic at ‘dangerous stage’ in Kentucky and nation, Birx says

The governor held a virtual press briefing afterwards, while Birx met with legislative leaders to discuss the pandemic, the vaccine and where things go from here.

One of the topics discussed with Birx was the current serious stage of the pandemic, according to Beshear, both in Kentucky and the rest of the nation.

He says they also discussed mitigation steps. “Dr. Birx includes in her steps the very steps we have taken where people congregate indoors, bars, restaurants, and also in people’s homes. Dr. Birx strongly supports the steps we had to take for that three-week period and can see through their data, just like we can, that it was working.”

The governor says Dr. Birx sees Kentucky at a high plateau. “We certainly want to plateau, to stop the exponential growth. What we now want to see is a decrease, and we all agree that we don’t know if we have plateaued or are about to decrease, or whether Thanksgiving is going to have a bigger impact. The White House Task Force says our mitigation steps were needed and are working.”

On Monday, the number of new cases in Kentucky was less than the previous two weeks, and the state’s positivity rate fell for 10 days in a row before a slight rise on Monday.

Birx said Kentucky needs to improve on testing of those between 18 and 30, Beshear said.

“Different ideas on how to set up testing that caters to that age range, and different thoughts on how we can do that. If we can get folks between 18 and 30 in a regular testing regimen, it doesn’t just help us identify asymptomatic people, it creates behavioral changes that are very positive and reduce the overall spread.”

Shot in the arm: Healthcare professionals get first vaccines

Five University of Louisville healthcare professionals were the first people in Kentucky to receive the Pfizer COVID-19 vaccine on Monday.... read more