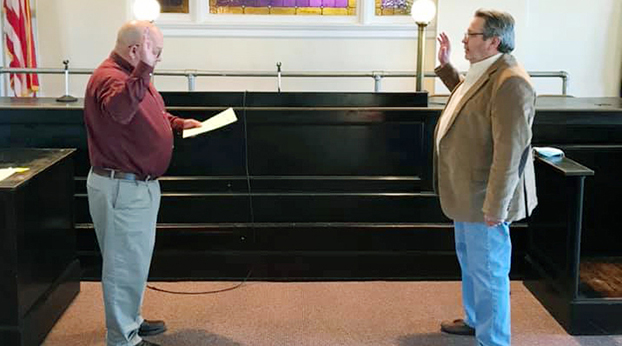 Bill Miracle, right, is sworn into office to fill out the remainder of Dalton Miller's term. Miller was elected Mayor of Stanford in November, leaving his seat on the city council vacant for one month. Lincoln County Judge-Executive Jim Adams swore Miracle into office on Dec. 4. - Photo courtesy of city of Stanford

A former Stanford Mayor and newly-elected City Council member Bill Miracle will finish out the new Stanford mayor’s term on the council.

The council’s Dec. 1 special-called meeting was brief, with the main item on the agenda being the appointment of Miracle to serve out Dalton Miller’s term.

Miller was elected to finish the late Stanford Mayor Scottie Ernst’s term until 2022. Once elected as mayor, Miller’s seat on the City Council became vacant.

In the race for the six seats on the Stanford City Council, Miracle received the highest number of votes with a total of 890.

The vote was unanimous.

Miracle was sworn into office by Lincoln County Judge-Executive Jim Adams on Dec. 4 and will serve out the last month of the term before beginning his new term on the City Council.

In other business, the council:
• Accepted a joint-grant agreement between the county, the city, and the Industrial Development Authority regarding the new Industrial Park off of Kentucky Highway 1770.

Lincoln County Farm Bureau was recognized for the achievements of its women’s program this year and received the 2020 Gold... read more