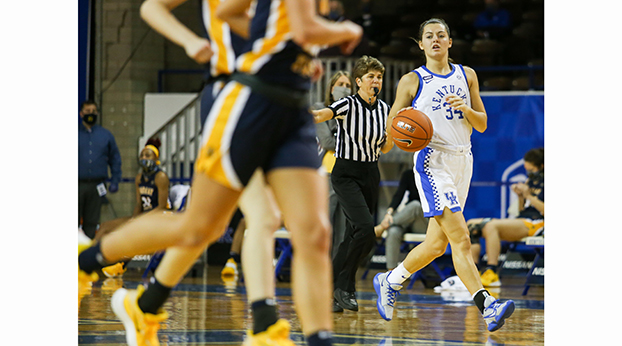 King ready for her shot at UK

For as long as she can remember, Emma King has wanted to play basketball at the University of Kentucky.

Other college coaches — Wisconsin, Louisville, Florida and Dayton — tried to recruit her during her Lincoln County High School career but she never really thought of going anywhere but UK once she got the offer from then UK coach Matthew Mitchell.

That’s why even though she played only sparingly last year as a true freshman at UK and now has a new coach in Kyra Elzy after the retirement of Mitchell, never doubt that King is going to be just fine at Kentucky.

Elzy, who spent a lot of time recruiting King, is not worried about the shots King missed. She was glad she kept shooting.

“Her shot did not go in and I am confident they will,” Elzy said after the opening game. “She has put in hours and hours of extra work. She is a student of the game and a tough, resilient player.

“I am very pleased with Emma. A year ago she would have gone into a shell if she missed a shot and not shot again.”

Junior teammate Blair Green understands what it’s like to be a shooter and not make shots. She’s gone through that during her time at UK, too. Green has no doubt King is going to be just fine.

“She is a great player. She is always putting in extra work. She hits those shots in practice,” Green said. “I was just tell her to slow down and focus. I know she can make those shots. Just be confident. She can knock those shots down like nothing.”

Kentucky has a roster loaded with more depth than perhaps it has ever had, including All-American Rhyne Howard.

King admitted last year was a major shock to her even though she thought she knew what to expect. This offseason she put in more work than ever.

“Emma has taken the biggest jump forward of anybody on our team,” the new UK coach said. “She is playing with so much more confidence.”

Elzy not only likes the way King has worked on her shot but also improved her defense.

“Emma will find her a place on the floor,” Elzy said. “She brings the heart and toughness I am looking for.”

Patriots fall to Corbin 38-14 in play0ffs

End season with 5-4 record The Lincoln County Patriots ran into a buzz saw Friday in the Class 4A football... read more