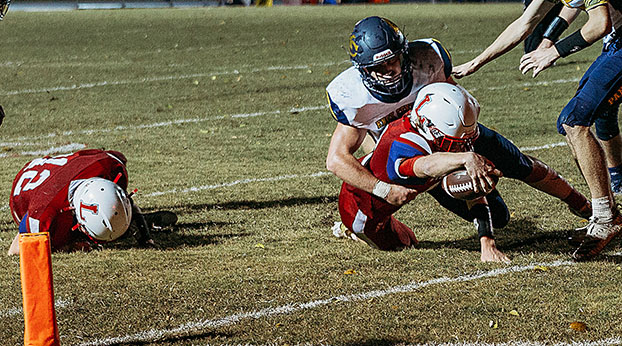 Clayton Davis dives into the end zone for one of his two touchdowns against Knox Central Friday. (Megan Renner photo) 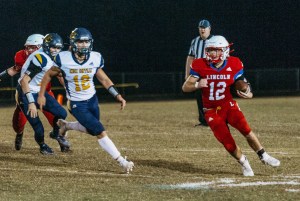 Lee Amon looks for running room Friday night against Knox Central. He finished the game with seven carries for 30 yards and a touchdown. (Megan Renner photo)

The Lincoln County Patriots have hit a rough skid. After opening the season with a 4-0 mark, the Patriots have now dropped three straight games, and all three of those have been district games.

Friday night saw the Patriots host Knox Central, and it ended in a 42-22 loss for Lincoln County. Offensively, Lincoln finished with 223 total yards of offense, with 20 of those coming through the air. Sawyer Horton was 3-for-9 passing for 12 yards, while Clayton Davis completed one of six passes for eight yards. 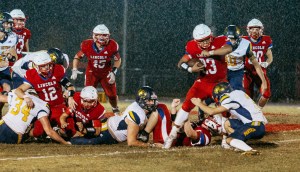 The running game is usually the bread and butter of the Patriot offense, and it was again in this game. Clayton Davis led the way with 12 carries for 66 yards and a pair of touchdowns, and Rodney Alcorn was close behind with 13 carries for 58 yards. Other rushers included Lee Amon (seven carries for 30 yards and a touchdown), Benjamin Harris (two carries for 28 yards), Trintan Chappell (two carries for 15 yards), and Elan Lane, who had one carry for six yards.

Amon and Robert Bowman led the defense with 13 tackles each, and Seth Horton added 12 tackles.

The Patriots, who are now 0-3 in district play and 4-3 overall, will host Rockcastle County Friday night at 7:30 p.m. in their final regular-season game. Lincoln County coach Spencer Crutchfield said his team is going to have a battle on its hands from the Rockets.

“The game this week is going to be a battle from start to finish. When you play Rockcastle the game is going to be physical, they are very aggressive on both sides of the ball. We both like to run the football and try to keep the other offense off the field. They will attack defensively and try to get penetration and disrupt our offense,” Crutchfield said.

He added that his team will have to match the physicality of Rockcastle and try to win the battle on the line on both sides of the ball.

Despite losing three straight games, Crutchfield said his team knows how to win and what they have to do to improve.

“We have played three really good football teams the last three weeks and we have come up short. Our guys understand that we have to come to work each day and make sure we are getting better,” he said. “We have to control what we can and that is how hard we work and the attitude we have while working. We have to continue to stay focused on what our ultimate goal is as a team and we still have an opportunity to reach that goal.”

Crutchfield added that there are always areas where his team can improve at each position on the field.

“There is no reason for us to get discouraged with the last three weeks, we don’t have time to put our head down or feel sorry for ourselves. We only have time to continue working and trying to become the best team possible we can.”

The Lincoln County Patriots football team had a perfect record when the trip to Wayne County began Friday, rolling to... read more