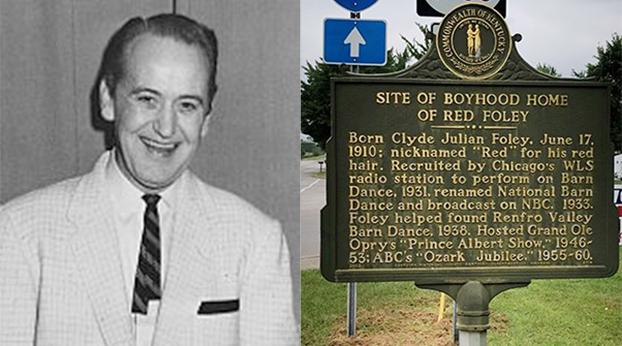 My parents were country music fans, and while growing up, I admit that I endured their choice of radio station programming. I’ve mellowed a lot in my adult years, though, and in a recent Ken Burns country music special series, I actually enjoyed hearing the twangy sounds I abhorred back in the 1960s.

I often heard Mom talk positively about Kentuckian Red Foley, who in 1967, became the first Kentuckian to be elected to the Country Music Hall of Fame, of which there were only six living members at the time. He was the person who made the country-gospel song, “Peace in the Valley,” such a classic hit. Red’s professional career demonstrated success in a variety of avenues. He was a singer-songwriter, a musician, a radio and TV host, and even an actor.

As I researched him, I found his Kentucky connection fascinating in more ways than one. Clyde Julian “Red” Foley, called “Red” for his hair color, was born in 1910 in Blue Lick, Kentucky, in Lincoln County. (This Blue Lick has nothing to do with the state park in Robertson and Nicholas counties.) His musical family later moved to Berea, in Madison County, and he learned to play the French harp, piano, banjo, trombone, harmonica, and guitar. Red was known to perform for customers at his family’s general store, and he won first prize in a statewide talent show. He attended Kentucky’s Georgetown College in 1930 and was “discovered” musically by a talent scout who asked him to sing for National Barn Dance’s house band, the Cumberland Ridge Runners. A small-town Kentucky boy made good, and there would be so much more to come.

Here is a small sampling of Red Foley’s other achievements over a long career:

I found out some other interesting facts about Red, too:

According to information provided in Wikipedia, there is an interesting short story surrounding Red Foley’s death on September 19, 1968. Red was doing two concerts in Ft. Wayne, Indiana, with Grand Ole Opry performer Billy Walker and 19-year-old Hank Williams, Jr., son of the senior country music icon. Walker noted that Red was moving slower than usual and had no appetite. Before the second show, Walker shared his faith in Christ with Red. “Do you think God could ever forgive a sinner like me?” Red reportedly responded. The conversation continued and Red shared with him some bad things he had done in his life. Walker remarked: “Red, if God can forgive me, he can forgive you,” and he prayed with Red.

As the story goes, Red went on stage and the last song he sang was “Peace in the Valley,” and after doing so, told Walker: “Billy, I’ve never sung that song and feel the way I do tonight.” Red, only 58, died in his sleep of respiratory failure that night. Hank Williams Jr. soon wrote and recorded the charted song, “I was with Red Foley (the Night He Passed Away).”

Red was interred at Woodlawn Memorial Park Cemetery, in Nashville. A powerful influence in the music industry, both Nashville and Kentucky claim him as one of their own.

Flu vaccinations are even more important in 2020

By Grace Colville University of Kentucky Flu season, like everything else this year, is looking a whole lot different. The... read more