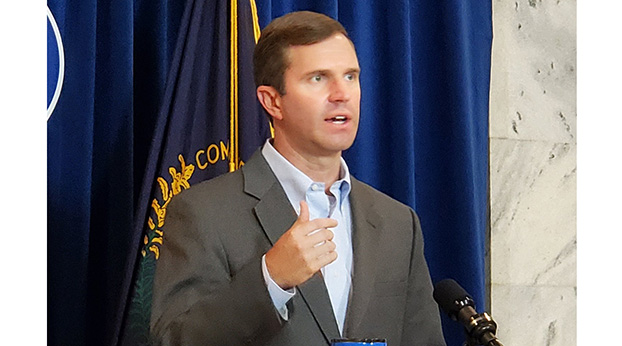 Gov. Andy Beshear said he will not overturn the decision by the Kentucky High School Athletics Association to begin fall sports practices and allow competition the week of September 7, but will require schools to report positive cases of the coronavirus to state officials.

“It’s not because I think it is a good decision or a wise decision,” he said during a Capitol press briefing on Monday, “but if we are going to defeat this virus we need people all over Kentucky taking responsibility to make good and wise decisions.”

Beshear noted that he has concerns, especially with the contact sports.

“By starting with some of the most high contact sports, that we risk a shortened season, that we risk what I think can be successful plans to get our kids back in school, that we risk every other sport that’s going to follow.

“We can’t be making every decision on what’s best for folks out of the Governor’s office, and it’s going to be incumbent on our superintendents, on coaches, on different groups to make the wisest decisions that they can.”

State Public Health Commissioner Dr. Steven Stack said they have created an online survey for schools, which he says asks them to self-report a handful of numbers every day.

“The number of cases among students and staff, the number of quarantined students and staff, and we’re just going to put it up on a dashboard,” Stack said.  “Just four numbers, make it available in real time and ask you to report it every day that school is in session.  Then we’ll have something available to the public they can go and see, and we’ll ask you to put it on your website.”

Beshear also announced that he has signed a new executive order regarding evictions for non-payment of rent, to deal with three concerns.

“Wanting to make sure people can stay in their home, that they’re not gaming the system at the expense of a landlord that is a commercial enterprise, and wanting to make sure we don’t have a lot of Kentuckians emerging from this crisis with a ton of debt that they can’t climb out of,” he said.

The order includes the following procedures:

–Landlords must give tenants 30-day notice of their intent to evict for non-payment, during which time the two sides must meet together, to try and work something out.

–No penalties, late fees or interest can be charged from March 6 through December 31.

Beshear said they are dedicating $15 million of CARES Act money to create a healthy at home eviction fund in 119 counties.  Jefferson County has already started its own program.  This aid is to help keep people in their homes while giving relief to landlords.

“Kentuckians cannot be healthy at home without a home,” he said. “We want to help get people in a place where they’re not only still in their homes, but they’re not going to owe five or six months of rent when they come out of this.”

Lawyers who want to volunteer to provide direct legal assistance to Kentuckians in need during the pandemic can visit Together Lawyers Can.

As for the coronavirus numbers, Beshear said there have now been at least 43,899 coronavirus cases in Kentucky, 373 of which were newly reported Monday.  Sixty-eight of the new cases were from children ages 18 and younger, of which 14 were five and under. The youngest was only 7 months old.

“The normal beginning of a school year has us all feeling the same things: We want to get over this, we want to get our kids out of the house.  And I, at least, am seeing a change that goes beyond the ‘When to return to school?’ debate,” he said. “We’re seeing more people trying to get out of quarantine when the health department has recommended it. Those feelings are natural but they’re harmful. This is a war. Whether we win or lose depends on the number of battles that we win. Let’s pick it up because lives depend on it.”

“We’ve been able to push our mortality rate almost a percentage point lower than the national average,” the governor said.  “But we had more deaths announced last week than in any week where we’ve been battling this virus.”

As of Monday, there have been at least 822,904 coronavirus tests performed in Kentucky. The positivity rate currently stands at 4.77 percent, down from 4.84 percent he reported on Saturday.  At least 9,544 Kentuckians have recovered from the virus.