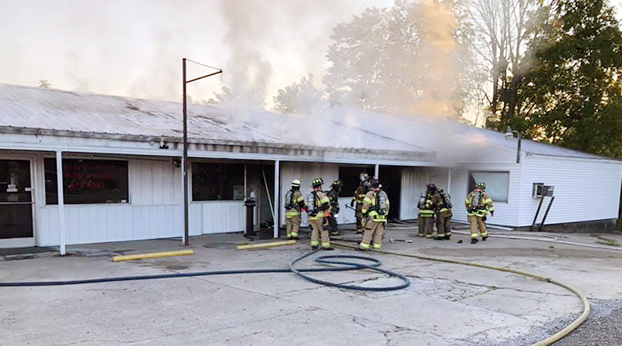 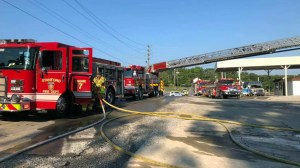 Photo courtesy of Crab Orchard Fire Chief Larry Owsley
Firefighters from surrounding cities including Danville, Hustonville and Crab Orchard, responded to a fire at a laundromat in Stanford Monday morning.

Firefighters from Lincoln and surrounding counties responded to a fire at a laundromat in Stanford Monday morning.

Fire trucks and police vehicles blocked the road to the laundromat at the intersection of Lancaster Street and U.S. Highway 27,  as firefighters worked to put out the blaze for about three hours, according to Stanford Fire Chief Scott Maples.
Maples said the call reporting heavy smoke and fire coming from the center of the laundromat came in at about 7:09 a.m.
No injuries were reported, Maples said.
Stanford firefighters were assisted by the cities of Danville, Crab Orchard and Hustonville, as well as the Lincoln County Fire Department.
It took firefighters about three hours to clear the scene, Maples said.
The cause of the fire is currently under investigation, according to Stanford Police Chief Zach Middleton, who said arson is suspected.
“Officer Chase Marcum, who also serves as Arson Investigator for the Police and Fire Departments responded to the fire this morning,” Middleton said. “He and Detective Tim Morris are investigating, as arson is the suspected cause of the fire.”
Police received photos of the suspect via video surveillance and are currently working to identify the suspect.
Anyone with information is asked to contact the Stanford Police Department 606-365-4525.
You Might Like

Almost four years after the body of a 22-year old Lincoln County woman was found in the woods, a Boyle... read more