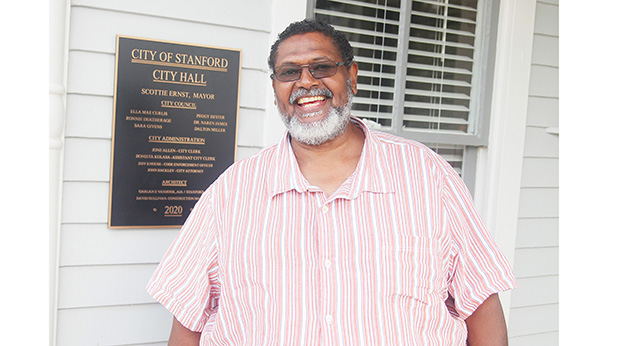 Jerry Wilkinson was sworn in as interim mayor of Stanford. He is the first African American to serve as mayor of the city. (Jeff Moreland photo)

The death of Stanford Mayor Scottie Ernst left the council with the decision to choose an interim mayor to serve until the November election or to allow the governor to appoint someone.

Jerry Wilkinson, a longtime Stanford resident, will be the first African American to serve as mayor of the city of Stanford after being appointed by the city council with a 4 to 2 vote. Wilkinson is a local pastor and a 1974 graduate of Stanford High School.

Wilkinson also serves on the Stanford Housing Authority board.

Before Wilkinson was nominated the city council heard from Joe Gilliland, who was nominated during the last meeting but was unable to get inside to discuss how he would handle the interim mayor position due to the doors being locked.

“When I came I couldn’t get in and I didn’t want to beat on the door and disturb the meeting,” he said. “…I am completely for the city of Stanford. It was asked why would someone want to quit a part-time job to become an interim mayor for three months; simply, I was asked to help the city and I thought, possibly, I could help some with the division.”

“There’s no time to plan anything, present it and get it into action during that time,” he said. “I had plans when I ran for mayor; I wanted to beautify Main Street, Mayor Ernst did that. I wanted to try and get community pride back. I wanted to have public gatherings like his July 4 reading of the Constitution, like his Christmas tree lighting, like his Easter bunny when he rode his wife around in his truck. Everything that I wanted to do, Scottie Ernst did. He has set that program in motion and if I had been selected as interim my only desire would have been to follow through for 80 days, 63 work days, with that plan that he started.”

Gilliland said he doesn’t want to see the city lose the momentum Ernst set in motion.

Council Member Peggy Hester asked if Gilliland is still interested in the interim mayor position, after making the statement he was not after the last meeting.

“There’s a lot of negativity between us,” Gilliland said.

“No there’s no negativity. I’m allowed to ask questions and I would expect an answer,” she said.

“All I’m asking is, are you interested in the position of interim mayor,” Hester said.

“…I know I will not get the vote; I know I cannot heal this council. You’re split three-to-three and there’s nothing I can do about it,” Gilliland said.

“…I have no problem with you. I have somebody else in mind and just because we’re split in a vote, this council has been together, some of us, for six years. I think that, you know, as a council we get along well,” Hester said. “There’s going to be disagreements there are going to be times but that does not mean that we need healing. We need to move forward, yes, we do do a lot. But we are not negative. We are allowed to ask questions, that’s why we’re here.”

Council member Naren James said he supported Gilliland for several reasons including he previously ran for mayor, he has no intention of running this November and he’s already a part of the administration.

“I think you have the qualification to do it,” James said.

“…I would reconsider if you all thought I was going to help the town. If I’m going to cause…I’m just not interested in causing anymore delay,” Gilliland said. “…Everybody has their idea of what is right and who they need and everybody is entitled to that right. I’m not angry because of that.”

Thursday night was the final night the council had to make a decision before the 30-day deadline. The Governor would have to make the decision after that time period.

Council member Ella Curlis said she was told that some City Council members called or traveled to Frankfort to see what procedures would go through or if the Governor would appoint someone.

Council members Ronnie Deatherage and Peggy Hester both said they did not make any calls or trips to Frankfort.

“So you can lobby the Governor to get it?” Curlis asked.

“Not necessarily…,” Johnson said. “It’s entirely up to the Governor. I wish I had an answer for you. It’s the Governor’s call.”

Miller made a motion to nominate Joe Gilliland again for the interim mayor position. The motion was seconded by James.

Next to speak was Wilkinson.

“I was approached by a few people who asked would I be willing to serve as interim,” he said. “I’ve been retired from the railroad since 2000 and have been a pastor for 20 years. I’ve had various positions in the district…I’ve lived in Stanford since 1967. I love this city.”

Wilkinson said living in Stanford all these years has been a blessing.

“Most of our classmates are gone and moved on and I count it a blessing that the Lord has allowed me to live here,” he said. “That’s the reason I decided to say yes, that I would be willing to serve for these three months. Of course, that would be up to you all.”

Council member James asked Wilkinson to tell him about his experience in making executive decisions.

As a pastor, he has had to lead the congregation in much of the same way.

“You have a proposal, you moderate it, you give the people all of the information just as you would a council…so you can make the best decision you can make,” he said. “Being a moderator of the south district where I was over many churches and pastors of course, it was up to me to lead and keep everybody together and on the same page. Just keep everybody informed of whatever direction we have to go.”

Wilkinson said he understands that there are things he would have to learn.

“When I became a pastor I had never been a pastor before,” he said. “I understand if you don’t have experience then you have to get your experience from somebody else. So when I first became pastor, what I would do if I came into a situation that I wasn’t familiar with, then I would call other pastors. I would ask for their input and ask them what they would do…”

Wilkinson said the ultimate decisions are made by the council and he would rely on the department heads to help make day-to-day operational decisions.

Deatherage, who was nominated during the last meeting, spoke on his behalf as a possible candidate for interim mayor.

Deatherage said he retired from the Lincoln County School System as the Chief Deputy of Support Systems.

“Which meant I was in charge of everything that was no instructional; I was the Food Service Director. I was instrumental in bringing in the free school lunches program to all students in Lincoln County. We had to do it a school at a time….doing that was the hardest decision I’ve ever made. In the long run it was the easiest decision because everyone in Lincoln County has benefited from it. Not having to pay for breakfast and lunch and snacks every day was a big deal. We had to start out with four schools. I was also told that if it didn’t work, the money had to come out of the lunchroom program.”

Deatherage said he has served in multiple administrative jobs within the school district and has served on the Stanford City Council for six years.

Deatherage and Wilkinson graduated in the same class at Stanford High School.

“I think that Stanford is a great place. We’re very strategically located as far as where we are…I think the potential for Stanford is unlimited,” he said.

Deatherage said an interim position means you’re there to hold things together until the next person is chosen.

Hester and Givens said they will continue to support Deatherage for the position because he is ready to serve and knows the issues the city faces.

Curlis nominated Wilkinson for a second time as interim mayor. The motion was seconded by Miller. The motion carried with a 4 to 2 vote. Hester and Givens voted against it.

Wilkinson was sworn in to serve prior to the meeting being adjourned.

“First of all, I just thank you all for this opportunity to serve and I will be on the job learning and I hope that each and every one of you will assist me and all of the department heads, I’m sure, that you all will continue to do your job. If there’s any way that I can help, I will be willing to assist you,” Wilkinson said. “To this council, as we go forward for the City of Stanford and it’s citizens, I pray that we will do it in decent…and let’s just love one another and do it decently and do it in God’s speed.”

The naming is subject to the agreement by any surviving Martin descendants.

“If you look, since 2009, property values in Stanford have gone, on real estate, from $121 million to $177 million,” he said. “This is really a very positive sign, the business inventory and equipment in that time period has nearly tripled. That’s a very positive business sign for the City of Stanford.”

According to the public hearing notice, the increase for the 2020-2021 budget year is needed due to the rising cost of city operations and will be applied to the general budget. The public hearing is set for September 10th at 6 p.m. at the Lincoln County Public Library.

A Facebook user – which turned out to be a fake account – has been reported to local police after... read more