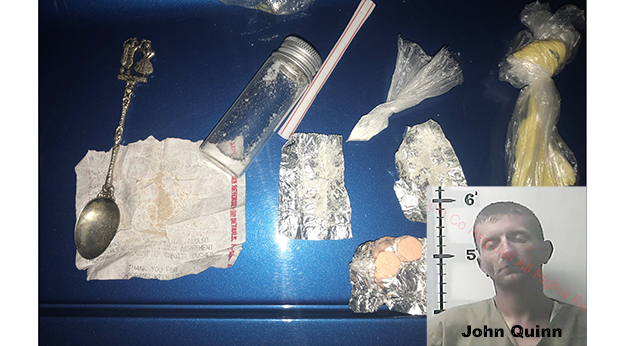 A Lancaster man was arrested in the early morning hours of Aug. 14 after Lincoln County Sheriff’s Deputies pulled him over and allegedly found him in possession of narcotics.

According to the arrest citation, Mullins conducted a traffic stop on U.S. 27 North at about 1:57 a.m. on Aug. 14 for verification of proof of insurance.

“In his front pant pocket was a clear baggy with a yellow baggy inside that contained a white substance,” the citation states. “Above (Quinn) stated (it) was salt. He advised me to taste it to test it, I declined.”

Quinn also had a “small spoon with grayish residue on it as well as a cut down straw.”

Quinn allegedly told deputies he “does ICE and nothing else” and denied ownership of the suspected drugs.

All Kentuckians can vote by mail for Nov. 3 election