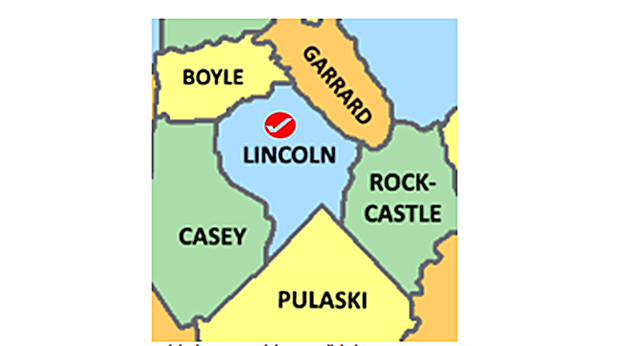 A new weekly report from the White House Coronavirus Task Force placed the Danville Micropolitan Area into its list of Kentucky communities that are considered at-risk based on the number of cases per 100,000 and positivity rates.

The Danville Micropolitan Area, which consists of Boyle and Lincoln counties, was listed as one of 17 localities in the state of Kentucky that were placed in the “yellow zone.” That zone is for localities and counties that have 10-100 cases per 100,000 population and a positivity rate between 5-10 percent.

Five Kentucky core-based statistical areas (CBSAs) were listed in the “red zone” of the report, a designation given for areas that are experiencing more than 100 new cases per 100,000 residents and a positivity rate exceeding 10 percent.

Louisville/Jefferson County, Glasgow, Bowling Green, Mayfield and Evansville were the five areas listed in that section. A total of 18 counties were listed in the “red zone”, which included neighboring Casey County.

Marion County and Garrard County were two other neighboring counties that made it into the report, as both were listed in the “yellow zone.”

Overall, Kentucky had 95 new cases per 100,000 population in the past week, compared to a national average of 137 per 100,000, according to Al Cross of Kentucky Health News. That number would place the state just outside of the “red zone” criteria for new cases.

Another notable change from the most recent report is the removal of recommendations that the state disallow visitation at long-term care facilities, and that individuals with obesity, diabetes, and high-blood pressure in counties or areas that fall into the red or yellow zone shelter in place, much like the orders that were given at the onset of the pandemic in Kentucky.

That report became public not long after members of the White House Coronavirus Task Force met with Kentucky Gov. Andy Beshear and other healthcare officials in the state government.

The report also touched on the topic of nursing homes in the state, an area that has been among the hardest hit since the beginning of the pandemic.

“The nursing home facilities with more than two confirmed or suspected COVID-19 cases are largely in red and yellow zones,” the report stated. “Preventing further spread in these areas is critical to protect the vulnerable nursing-home population. Protect vulnerable populations in assisted living and long-term care facilities through weekly testing of all workers and requiring masks. In facilities with workers who tested positive, ensure all residents have been promptly tested and appropriate cohorting measures are in place. Conduct on-site inspections to ensure covid-19 safety guidance and considerations are being implemented.”

The report says 7.2% of the state’s nursing homes had at least one infected resident, an increase of 0.6 percentage points from the previous week.