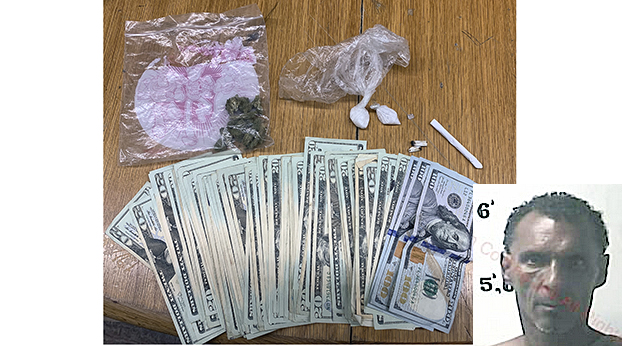 Rodney L. Newcomb of Spice Ridge Road was arrested following surveillance on a residence on Orchard Street, where narcotics trafficking was suspected. Cash and drugs were found in Newcomb’s vehicle at the time of his arrest. (Photos courtesy of Lincoln County Sheriff’s Office)

A man was arrested earlier this month following a narcotics investigation by the Lincoln County Sheriff’s Office.

According to the arrest citation, Deputy Daniel Napier and K9 Deputy Michael Mullins were conducting surveillance on a residence located on Orchard Street in reference to suspected narcotics trafficking.

Within the last month, Mullins conducted a controlled buy of suspected methamphetamine at the location and developed intel, including what car the alleged dealer drives.

During the traffic stop, deputies observed “two roaches inside of the cup holder on the center console in plain view.”

“(Newcomb) also stated that there was some ‘weed’ and retrieved a baggie from the driver’s door that had a green, leafy substance inside,” the citation states.

“Inside of (the) ash tray, I located a large amount of cash in mostly various denominations,” the citation states. “inside the center console I located another baggie with (approximately) three grams of white, crystal substance inside.”

An open container of beer was also found inside the console, according to the citation.

Newcomb was arrested and charged with trafficking in a controlled substance (methamphetamine); possession of marijuana; careless driving; and improper lane usage.

A new weekly report from the White House Coronavirus Task Force placed the Danville Micropolitan Area into its list of... read more