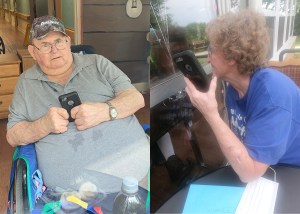 Bobby James, left, holds his phone as he looks through the glass door and talks with his wife, Bonnie, who was on her phone outside. (Jeff Moreland Photos)

Bobby and Bonnie James have spent their lives together. The couple married June 17, 1960. Each is a native of Lincoln County, and for the past four years, Bobby has been a resident of the Danville Centre for Health and Rehabilitation.

Wednesday afternoon, the center hosted a drive-thru parade for many residents, and when April Lawless, activities director at the center, found out about the special day for Bobby and Bonnie, she had to do something to help them celebrate. The center had already been planning a drive-thru parade for family members to see their loved ones, and Lawless decided bringing the two events together would be best.

“I was calling families and letting them know, and Bonnie had visited that day. She asks for me all the time if I’m here. We just have a bond. I told her they could have the family parade, and they could drive through,” Lawless said. “She said OK, and asked when it would be, and when I told her it was June 17, she said, ‘That’s my 60th wedding anniversary.’ I decided I wanted to do something extra special or them. Who spends 60 years together these days?”

The James’ marriage has brought two sons, Bobby, of Versailles, and Bill, of Danville. They also have four grandchildren and two great-grandchildren. Lawless decided to reach out to the family, and Bill was in on the celebration, although Bobby and Bonnie didn’t know anything about what Lawless had in the works for them.

“It was just a special celebration with the parade. My dad hasn’t been home in four years, and April kind of caught wind of it being their 60th anniversary. She got with me and wanted to do something to make it special,” Bill James said.

When the parade was over, Lawless had to let Bobby in on the surprise.

“I said me and you are going to go meet for supper for an anniversary supper,” Lawless told Bobby. “He smiled and started crying.”

Lawless left out no detail. She arranged for a meal to be prepared for the couple, and she even made sure there were gifts from Bobby to Bonnie. Lawless said she bought an apple-scented candle for him to give her, and she added a special treat, which turned out to be perfect. The treat was Reese’s peanut butter cups. Although she didn’t know it when she bought them, Bobby told Lawless that Reese’s are the couple’s favorite.

With COVID-19 concerns, Bonnie couldn’t go inside the center. She regularly visits, but has to see Bobby from the window outside his room.

Wednesday, she and Bobby sat just a few feet apart, with a glass door at the rear of the center separating them.

“This is better than sitting outside your window,” Bonnie told Bobby. She added, “I hope it’s not long until we can be together. It’s been over four months since I’ve been inside to see him. It won’t be much longer, will it, baby?”

Bill said his parents deserved the celebration, and added that they are just “really good people.” His father worked over the years, including a career at American Greetings, as well as operating a moving business, raising goats and pumpkins. As for his mother, she worked at the hospital in Lincoln County, and now continues to work at Walmart.

“I didn’t want it to be this way for their 60th,” Bill said of his parents’ anniversary. “My mom and dad have never been apart. He’s been retired from American Greetings for almost 30 years, so they were always there at the house together. They’re just the type of people that would do anything for anybody.”

Before the two enjoyed their anniversary dinner, Bonnie and Bobby continued to visit and talk, and to help them hear each other, they used cell phones.

“God’s been good to us to give us 60 years together,” she told Bobby.

Lawless said after the dinner, Bobby and Bonnie were both very appreciative of what had been done to celebrate their special day. Bonnie told Lawless she didn’t know what she could do to repay her.

“I told her there’s no repaying,” Lawless said. “It comes from the heart.”

Several people turned out for a peaceful protest in Crab Orchard Monday to support the Black Lives Matter movement. A... read more