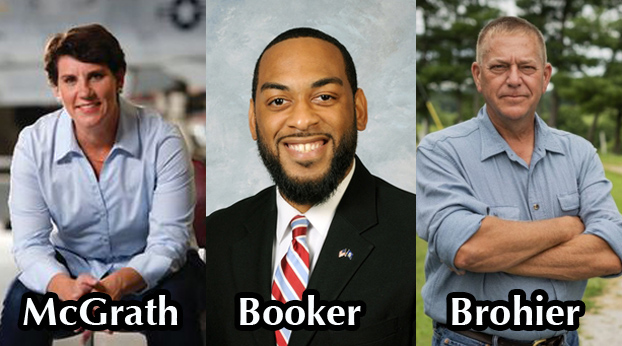 McGrath takes on Booker and Brohier in only scheduled Democratic U.S. Senate debate

Amy McGrath debated her two most prominent challengers Monday night on KET in the only scheduled debate among Democrats who want to take on U.S. Senate Majority Leader Mitch McConnell this fall.

McGrath’s more liberal challengers, state Rep. Charles Booker of Louisville and Lincoln County farmer Mike Broihier, struck contrasts with her on several issues, including a universal basic income of $1,200 a month for every American, which they favor and she does not, and how quickly to raise the $7.25 federal minimum wage to $15 an hour. They want it raised immediately; she favors a gradual raise.

McGrath also differed on health care, supporting a “public option” government health plan in Obamacare rather than “Medicare for all,” which Booker and Brohier support.

One of the big issues was McGrath herself, and her strategy of appealing to Democrats who voted for President Trump, who carried Kentucky by nearly 30 percentage points in 2016 and remains popular in the state.

Brohier said centrist Democrats “get creamed every time” by McConnell. He challenged McGrath on her on-and-off support of Brett Kavanaugh for the Supreme Court ”on an issue that should be a no-brainer for any progressive candidate.”

McGrath responded by saying she wants to be “a voice for everyday Kentuckians” and “I’m not a polished politician. . . . I don’t see everything through a political lens.” Finally replying directly, she said. “I make mistakes just like everyone else, but when you make one, you correct it, and that’s what I did.”

Asked to explain her contention that McConnell is part of “the swamp” that has blocked parts of Trump’s agenda, McGrath cited proposals to control drug prices and build infrastructure, which she said Trump favors but McConnell has blocked.

McGrath said she would “stand up to any president” on constitutional issues … or when it’s bad for Kentucky.” She said one example of the latter is Trump’s trade war with China. “It’s not about your party or being pro- or anti-any person,” she said. “It’s about being pro-Kentucky.”

Asked if she could find ways to work with Trump is both of them were elected, she said, “That’s what people want. … This is the opposite of what Mitch McConnell is,” causing “dysfunction when someone of the other party is in power.”

Booker, who spoke next, referred to McGrath’s strategy: “When you understand the challenges Kentuckians face, you don’t run as a pro-Trump Democrat.  We can smell b.s. from a mile away.” At another point, he told her, “You’re not going to convince people who voted for Trump to vote for you because you’re not as bad as Mitch McConnell.”

Host Renee Shaw began the one-hour debate by asking the candidates about the protests sweeping the nation.

Booker, an African American who has participated in the protests in Louisville, said “It isn’t aspirational just to listen and say we need to do more” about social injustice. “We need results right now, and it means we have to acknowledge the challenges that are levied within the institutions that see someone like me, who doesn’t come from a lot, as a deadly weapon before a human being.”

Booker and Brohier said the National Guard should not have been sent to Louisville. Booker said the move escalated tensions, which resulted in the shooting death of restaurateur David McAtee Sunday night.

Broihier, a retired Marine lieutenant colonel, said the federal government should stop selling military equipment to local police. “It sets the wrong mindset,” he said. “And the police they think they’re at war. In war you need an enemy. And the enemy, sadly, too many times, are African Americans.”

McGrath, also a retired Marine lieutenant colonel, didn’t give her opinion of the Guard callout but said police forces need a “command climate” in which subordinates reflect their leaders.

At the debate’s close, Broihier was the only candidate to say who former vice president Joe Biden should pick as his running mate: U.S. Sen. Kamala Harris of California.

In conclusion, he said his background would help him break McConnell’s grip on rural voters. “I can run in every single corner of this state,” he said, “and that’s what you need to have to beat Mitch McConnell.”

Booker also made a pitch to rural Kentucky, saying, “I know what it means to feel invisible, to feel like nobody listens to you or cares about you. And the reason I have to answer this question so much is that because no one pays attention to my neighborhood.”