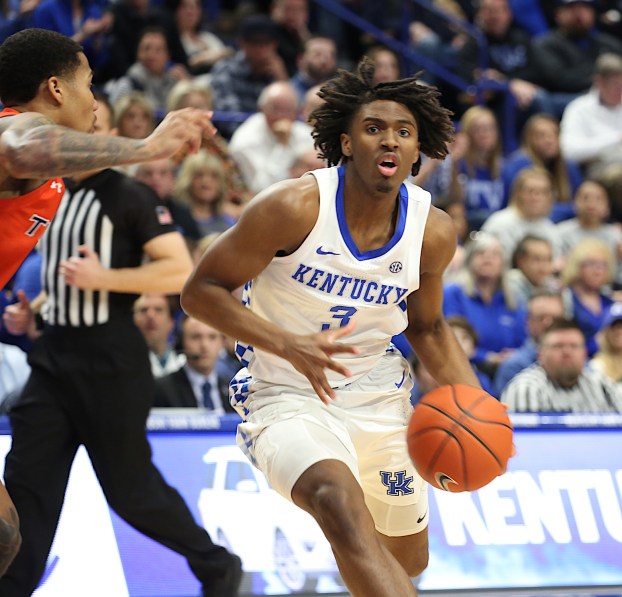 Freshman Tyrese Maxey has promised his parents he will complete his college degree after deciding to keep his name in this year's NBA draft. (Vicky Graff Photo)

Denyse and Tyrone Maxey were disappointed when their son, Tyrese, could not complete his freshman season at Kentucky due to COVID-19. However, their disappointment was nothing compared to his.
“He was the one who put in the work. He was devastated with the way the season ended,” Denyse Maxey said. “I don’t know how to put into words that he was not able to fulfill that part of his dream (at Kentucky). He was so disappointed (over not playing in the SEC or NCAA Tournaments).”
He’s been back in Texas since UK called off campus classes and is on the verge now of finishing his second semester classes.
“He does pretty good academically. We do not have to necessarily really get on him about that,” she said. “He has done a pretty good job and he can contact his academic advisor if he has any issues. He will get his word done.
“It’s harder for me to keep my 13-year-old (daughter) on schedule. She’s only an eighth-grader. College age kids get it and how to manage time and academics better. Plus, he graduated high school in the top five percent of his class.”
Maxey won’t be back at UK as he has put his name into the NBA draft. He’s projected as a consensus first-round draft pick with some mock drafts having him going into the lottery. However, he’s already made one promise to his parents.
“He has also promised us he will come back to UK and finish his degree. He knows that’s what we want him to do and he will do that,” Denyse Maxey said.
Having Tyrese Maxey back at home since late March has been a bit different for his parents.
“He is driving me crazy at times,” his mother said. “I told KP (UK assistant coach Kenny Payne) and others that they owed us money. We anticipated him being there (UK) and us not feeding him,” Denyse Maxey said. “I had let my Sam’s (Club) card go. I had to renew that membership.
“He eats breakfast and then before long is back eating again. He needs all kind of different snacks, dinner, midnight meals. It’s like he never stops eating.”

By LARRY VAUGHT Growing up in Nigeria, soccer was the sport that Frank Anselem played first. “For African kids, that’s... read more