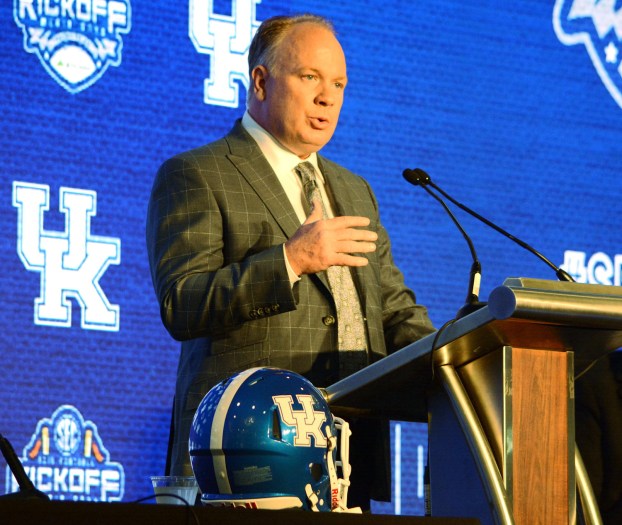 Stoops expects season to start on time, wants fans in the stands

The University of Kentucky football coach is hopeful the college football season will start as usual and won’t be delayed by the current COVID-19 pandemic. Many professional football teams in various states have taken steps to begin preparing for the upcoming season and Stoops thinks some form of normalcy will resume in the near future, but with some adjustments.

Stoops said he’s not sure that playing games without fans in the stands is a “viable option.”

“I think there are definitely some different challenges for us,” he said on a video conference with reporters on Monday. “The first thing that comes to mind is there’s going to be a lot of critics out there. The optics of it, to say you’re going to have college kids allowed to play, line up six inches apart from each other, breathe on each other, sweat on each other, get in big piles and do all that but you’re not allowed to have fans in the stadium? That’s going to be the first thing you hear, right? The optics of it. That’s the decisions people need to make.”

Stoops added that the financial piece of the puzzle also is part of the equation.

“I think It’s very important to have people in the stands. Universities are counting on that,” he said. “We need people in the stands. Before this whole situation happened, you heard me talking about it, encouraging our fan base to pick it up and pick up season tickets and get in there because we need them. It makes a difference to us having them in there both financially and for their support.”

Stoops said off-site and individual workouts will take a different course next month as teams slowly get back into a rhythm. Stoops added he’s not sure when players will return to campus but added he’s been planning accordingly.

“We’re going to take it up another notch with our training,” he said. “We’re going to mail them some things to help with their workouts and things of that nature. As far as when we are going to get back to work and all that, your guess is as good as ours.”

The Kentucky coaching staff, from top to bottom, have kept in touch with the players through electronic means of communication and Stoops has been pleased with how his squad has responded amid the current pandemic.

“We’re dealing with it as best we can just like everybody else,” he said. “It seems our players are doing a good job academically and physically from what we can tell, the guys are doing what they’re supposed to do. Obviously it’s hard for us to monitor that, but we’ve just got to go on their word and (we) believe what they are telling us. It seems like they’re working very hard. We’re doing everything we can to be prepared and ready to play on Sept. 5.”

Stoops participated in a call with Southeastern Conference officials and other coaches in the league and said everyone was on “the same page” despite the uncertainty surrounding a return to the field and added fans should be allowed to attend games this season.

“If it does get pushed back, then we’ll deal with it, we’ll deal with it the best we can. But it’s really important for us to be out there.  It’s important for our state and our community for our fans to be there.  I know everybody’s going a little stir-crazy right now, everybody’s starving for some live sports.  We want to provide that, we want to be out there and provide an outlet for people, a way to escape some of this. Obviously we have to do it in a safe manner.”

UK’s Bowden expected to be selected in NFL draft