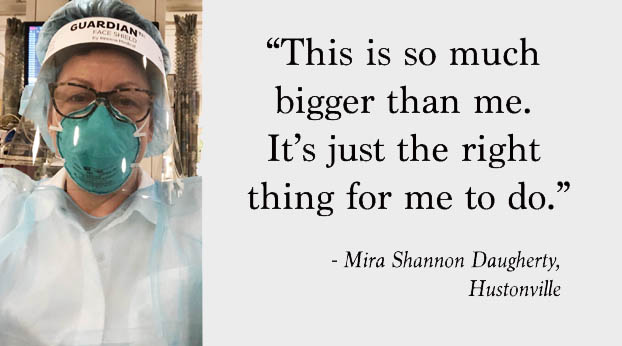 Mira Shannon Daugherty moved to Kentucky from California about 17 years ago and has lived in Hustonville in Lincoln County.

“My mother was born in Crab Orchard (in Lincoln County). I have roots here,” Daugherty said.

She worked as intensive care unit nurse at Ephraim McDowell Regional Medical Center before moving to the Ephraim clinic in Liberty after she became a nurse practitioner. Today she’s in New York working to help medical personnel and nurses battling the COVID-19 outbreak.

How did she get from Hustonville to New York at this crucial time?

“It’s kind of crazy, but I am a firm believer things happen for a reason,” she said. “I had given my notice and had a new job, but then it was delayed (by COVID-19).”

She reached out to Ephraim McDowell to see if her contract in Liberty could be extended so she could keep working, but was told she could not have an extension because business was slow due to COVID-19.

“I had a pity party, was mad and cried myself to sleep,” Daugherty said.

That’s when she remembered a plea from New York Gov. Mario Cuomo for help. Without knowing how long before her new job would start, she received an email with information about jobs in New York if she was interested. She replied and within 24 hours had been contacted, signed a contract and was heading for New York.

“I have been in New York since April 4 and worked my first shift April 9,” Daugherty said Wednesday on her night off. “I am anticipating being her  until May 30.

She said if she was working in Danville and people were dying like they are in New York she would want someone to help.

“This is so much bigger than me. It’s just the right thing for me to do,” she said. I want to make a difference.”

She will be 50 next week. Her husband, Troy Daugherty, turned 48 last week, and she talks to him two or three times daily via phone since he remained in Lincoln County.

“He is holding the home fort down,” she said. “He is worried about me and I know he would prefer that I had not come. I do think part of him is really proud of what I am doing but he doesn’t voice that much because his fear for my health is greater than the pride he feels for what I am doing. I get that.”

She’s actually working on Long Island, which she says has been “devastated” by COVID-19.

“The hospital on Long Island where I am at in March had an addition to discharge ratio of 4-to-1, which is why they needed so much help. Now they are close to 1-to-1,” Daugherty said. “Last week they discharged like 400 patients, which was really good for us to know.

Daugherty said New York restaurants are closed and some have signs posted noting it’s the first time in 20 years they have not been open. Like here, some restaurants are doing takeout and delivery.

“It’s not too bad here. A few grocery stores are open but I could not find any meat or a few other things,” she said. “I found a meat shop fairly close by, and two doors down from it was a fish market. I bought salmon, shrimp, fresh chicken. Me and my roommate are managing to cook some.”

Daugherty has been to New York City before and says it is “eerie” to see it so empty now.

“I took the train from Long Island into the city. Almost nobody was on the train. It was very bizarre. I got off at Penn Station and it was just empty,” she said. “It was so quiet and empty.”

She’s also had work-related experiences unlike any she’s ever had.

“The standards of care in nursing and standards in crisis nursing are a lot different,” she said. “Things are just a lot different, but we make the best out of the situation we are in, and I just hope I can continue to make a difference.”