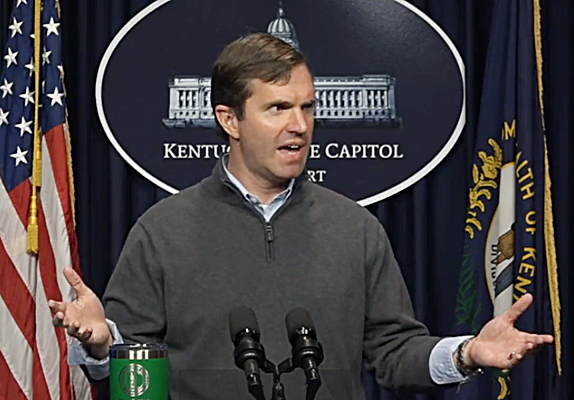 Kentucky Gov. Andy Beshear announced Monday that Kentucky’s economy will start to open up more on May 11, with everyone being required to wear masks.

State sees second-highest number of new cases in one day

FRANKFORT, Ky. (KT) – Saturday saw the second highest number of new cases of the coronavirus since the pandemic began, 206, along with seven more deaths.

That brings the totals to 2,707 cases, with 144 Kentuckians losing their lives, according to Gov. Andy Beshear.

During his daily press briefing, Gov. Andy Beshear stated, “We had a big number of cases today, but on the three-day average, it’s still about a plateau.”

He said that’s important to be able to ease some of the restrictions that have been in place. “What we’ll need to be seeing is the number dropping, but when everybody starts seeing that we’ll know we’re moving in the right direction.”

Beshear said what will re-open first depends on the data and the science. “I think the first place you’ll see easing of restrictions is in our healthcare sector. If we have enough personal protection equipment, or areas that don’t require as much PPE. Next would be areas that can follow CDC guidelines, because of the way their industry operates.”

He also noted, “When we have an opportunity to be out more, we’re going to be recommending that people wear cloth masks. Not the N 95 masks that our healthcare folks need, but it’s definitely going to be a new normal.”

Recent demonstrations against restrictions issued due to the pandemic won’t make a difference on decisions to ease them, the Governor said. “I don’t feel pressure because the guidance, which is what I look at, the guidance that President Trump has put out suggests cases ought to be going down for 14 days, that we have to have sufficient testing capacity. It has to be phased and gradual and we have to follow social distancing guidelines.”

Beshear said the area that continues to see the highest growth in cases is long-term care facilities, such as nursing homes. “Today we have 40 more residents and six more staff that have tested positive, along with three more deaths.”

A lot of the federal funding coming to Kentucky under the CARES Act will go to contact tracing to determine who a person testing positive for the coronavirus has been in contact with.

“I believe I am going to have a plan early next week that’s going to identify some first initial numbers, and it’s going to be large,” he said. “It’s going to be hiring a large number of people from now until we defeat the virus. The CARES Act money has to be spent by the end of December, and you can expect a significant operation.”

Beshear also said the Kenton County drive-thru testing facility handled 212 people on Saturday, seeing a total of 848 during the four days it was in operation.

Next Tuesday, drive-thru centers will open in Madisonville, Paducah, Somerset and Pikeville, and he says the goal is 1,000 tests at each facility, over a four-day period.

New locations will be released on Wednesday, according to the Governor. “That announcement is going to have some additional services that are going to be worked in those locations.”