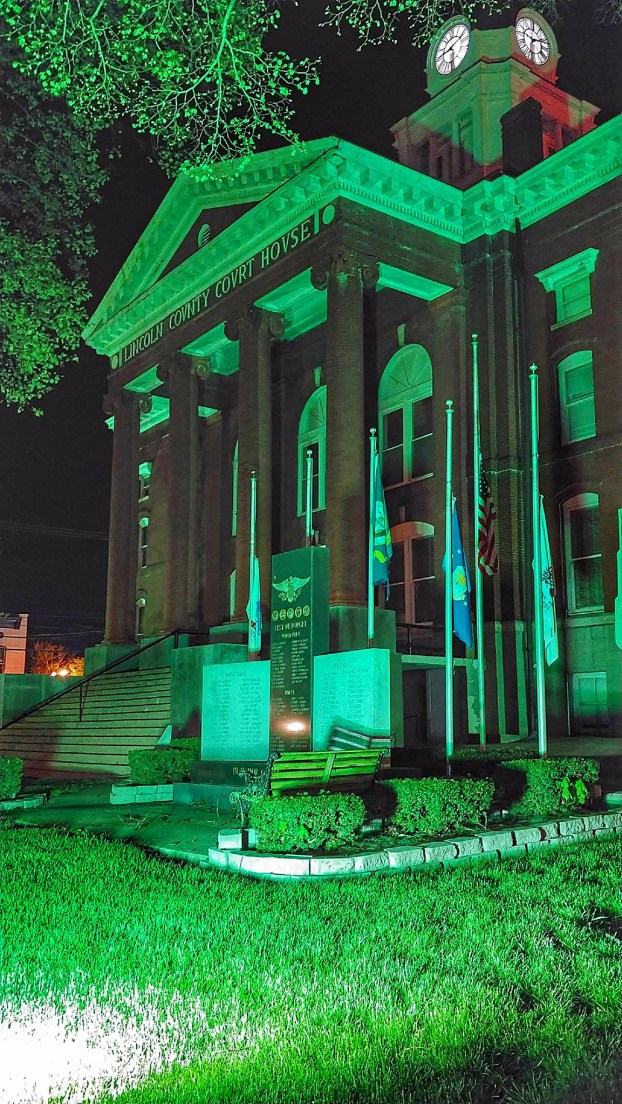 Photo by Abigail Whitehouse The Lincoln County Courthouse honors those who have passed away during the COVID-19 outbreak by lighting the courthouse green.

STANFORD, Ky. – While maintaining a six-foot distance from each other, Lincoln County Fiscal Court magistrates met Tuesday morning to approve bills and discuss plans moving forward as the novel coronavirus (COVID-19) continues to spread across the Commonwealth.

Judge-Executive Jim Adams Jr. said unless there’s an emergency, the fiscal court will be cancelling the regularly scheduled meeting for April 28 and will plan to meet again on May 12.

“Because of the slow down, we’re not going to have as many invoices to pay and all of our utilities are on standing orders so we don’t have to approve those,” Adams said.

Governor Andy Beshear has advised local government agencies to either hold meetings online or postpone/cancel meetings if they can, until the COVID-19 outbreak is under control.

At this time of year the Lincoln County Fiscal Court typically meets more often in order to hold budget workshop meetings but that won’t be possible with the COVID-19 virus still spreading, Adams said.

“Typically we meet two or three times to hash it out and decide what we’re going to do,” he said. “I think we’re going to have to get down to one time (meeting) probably, then take it home and take a look at it and decide if you see something we should discuss again or change. I think that’s what we’re going to have to do this year – and I don’t like that because every year we’ve pretty much taken what she (treasurer) gives us and then decide what we want to change. I think we can still do that but it’s going to be a little tougher.”

County Treasurer Mary Hopkins invited magistrates to send her any and all suggestions for the budget.

“Keep in mind that we are going to plan very conservatively because we have no idea what kind of a punch we’re going to take as far as revenue,” Hopkins said. “I think it’s going to be a lot and I’m going to plan for us to take a big one.”

Adams said due to the coronavirus, some county workers have been furloughed and the county budget has seen some savings from that. An employee furlough is when staff members are required to take an unpaid leave of absence.

“At the park, we usually have two employees at the park. One is seasonal, both of them are gone, of course the director is gone. All of our spring programs are pretty much cancelled. We first postponed but now you can pretty much say they’re cancelled,” Adams said. “At the road department we have three people working. We have Johnny Carrier, Roger Ledford and Bo Gander and Bo Gander has the phone out there coming to his cell phone.”

The road department usually has a total of 16 employees, Adams said.

“Joe Bunch here is on one day a week, so he is furloughed four days a week,” he said. The jail also has an employee that has been furloughed.

Adams said he couldn’t speak for the state agencies such as the PVA and Circuit Clerk’s office but he believes they have been rotating staff in and out of the office and working from home as much as possible. Day said the Lincoln County Attorneys Office is still open because they have a window separating staff from the public and can limit exposure.

The county is seeing some savings from the temporary furlough, Adams said.

“We’re saving, probably over a four-week period, I think in the $75-80,000 range. That’s salaries and retirement and social security and medicare,” Adams said. “We’re paying their insurance as if they were working so we’re not saving any money on the insurance side.”

The biggest hit will likely come from the payroll tax, he said.

“We’re going to take a little bit of a hit at the end of the first quarter, because of the last part of March, but it’s not going to be anything like the hit we’ll take in the second quarter,” he said. “I don’t see this thing getting open backed up before mid-May at the best. The president wants to open up at the first of May, I don’t think that’s going to happen. I think it’ll probably be mid-May before we start to see anything so we’ll take probably a two-month hit on that.”

It’s unclear how many small businesses in the area will be able to reopen after all of this, Adams said.

“You don’t know how many of them are going to open back up,” he said. Adams added one positive note is that the school board is still paying employees and that is a large portion of the county’s payroll revenues.

“We’re in good shape. Our reserves that we’ve built up are still there so if we need them, we’ve got money to dip into to take care of it,” he said.

Adams said he hopes things can go back to normal within four-to-six weeks but until then, the county will continue to adjust and prepare.

Right now, the biggest concern for the county during the COVID-19 outbreak is at the Lincoln County Regional Jail (LCRJ) and the Stanford Care and Rehab facility, where one employee has tested positive, as well as one resident who passed away Tuesday this week.

Lincoln County Daryl Day said the numbers are low because police officers are having to violate their oath and resist making some arrests.

“Every warrant at the top says ‘you shall arrest,'” Day said. “Every day I get a call from a police officer that says ‘I stopped this guy’ or ‘I ran into this guy and he has a warrant. What do you want me to do?'”

Day said he has been advising those officers to let the suspects know they will eventually be arrested.

“Generally, 95% of the time, here is my response: ‘You tell them that we’re going to eventually arrest them, but not today because we’re not putting them in the jail,'” he said. “The police officers are really walking a fine line because if you don’t arrest that guy and three hours later you get a call somewhere and he’s killed somebody, how is everybody going to feel then? But that’s the decision they’re making on the side of the road every single day.”

Officers have not been told to stop making all arrests, he added, and they will still be making arrests when it comes to violent offenses.

“They have been told that for serious offenses, you arrest: domestic violence, murder, rape, arson, those things,” Day said.

The inmate numbers are artificially low, Day said, because of the novel coronavirus.

As of Tuesday, LCRJ Chief Deputy Jailer Robin Jones said there is a total of 74 inmates in the jail. The total number of Garrard County inmates is lower too, Jones said, with a total of 16.

“State inmate numbers are running somewhere around 40 but we’re getting ready to lose seven I know for sure…” Jones said. “It’s temporary.”

NEWS RELEASE FRANKFORT, Ky. — With the COVID-19 state of emergency still in place in Kentucky and nationwide, the Supreme... read more