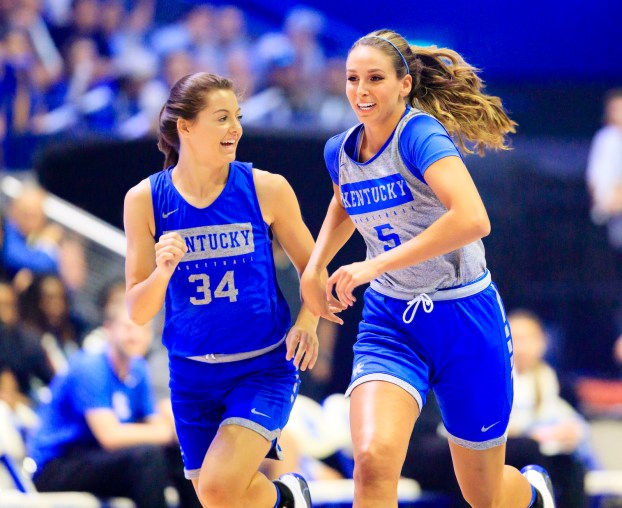 Freshman Emma King, left, said coach Matthew Mitchell has always made it clear to his players that his heart is in Kentucky. (Jeff Houchin Photo)

Freshman Emma King was not surprised when Kentucky coach Matthew Mitchell didn’t waste any time making it clear he was not interested in the coaching vacancy at Mississippi State, his alma mater.

Mitchell’s success at UK made it easy to speculate that he might be interested in the job since State has become one of the elite teams not just in the SEC but in the nation.

“He has talked to us all about how much he loves Kentucky,” King said. “He makes it very clear where his heart is. He proves every day he likes it here.

“He says all the time he would not rather have any other group. He loves going to battle with us. I did not think he was going anywhere even before he said it. He is a man of his word. His family enjoys it here with him and we love playing for him. So no, I never thought about him even leaving.”

She was also not surprised that her coach reacted the way he did when sophomore Rhyne Howard did not receive All-American honors from the Women’s Basketball Coaches Association. She was SEC Player of the Year and two other SEC players were named All-American in voting by coaches.

“That to me … I don’t agree with that. Rhyne has proven she is the top in the country if not the best. She proves that every game. It just does not really make sense she was left off,” King said.

King does know how Howard will react to that omission.

“She will use this to fuel that fire and that should be pretty scary to teams playing us next year,” King said.

Calipari says handshakes may be thing of the past in sports

By LARRY VAUGHT   If Kentucky coach John Calipari is right, pregame and postgame handshakes likely are a thing of... read more