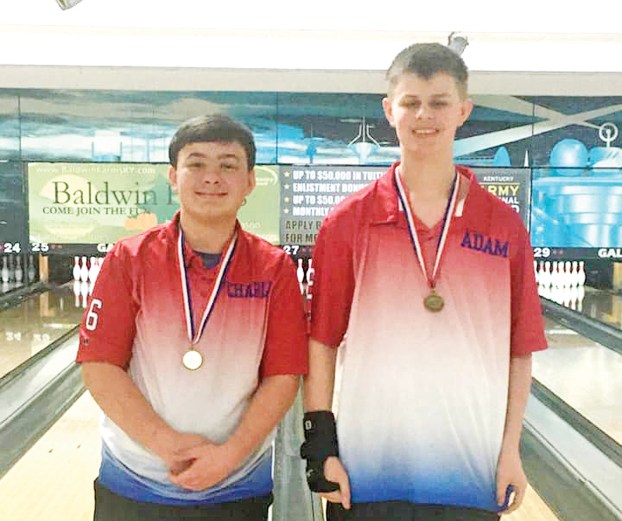 When attendance is taken at Lincoln County High School and Lincoln County Middle School this morning, Charlie Cole and Adam Spears will be noticeably absent.

While their classmates are hard at work in the classroom, Cole and Spears will be playing – and not hooky. Cole, a freshman at LCHS, and Spears, an eighth-grader at LCMS, will be spending their Thursday on the lanes competing in the 2020 KHSAA State Bowling Championships.

Cole and Spears will be competing in the Unified Team Championships with 13 other teams from across the state. The local bowlers will begin state play at 8:30 a.m. this morning on the lanes of Executive Strike & Spare in Louisville.

The Patriot duo earned a berth in the state finals by capturing the Region 8 Unified Team title at the Galaxy Bowling Center in Richmond.

Cole and Spears went into the regional tournament seeded eighth out of 12 unified teams then proceeded to pick off the competition one-by-one, beginning with the ninth-seeded team of Luke Pole and Jack McGuire. The first-round win advanced the Patriot bowlers into the quarterfinals where they took down the tourney’s top-seeded team of Austin Ratliff and Shawn Lawson, and they earned an automatic berth in the state tourney with a semifinal win over Jonathan Prevett and Logan Hughes of Fleming County.

With the top two teams in the region advancing to state, Cole and Spears knew they were Louisville-bound but they assured themselves a trip as champion by beating Morgan Sparks and Jacob Sparks of Madison Central in the finals. The Sparks were the tourney’s two seed.

In the Girls Team Championship Bracket, the Lady Patriot bowling team came in eighth out of 13 teams. Four of the five teams that were in the boys top five were also at the top in the girls scoring, with Boyle County taking second, Corbin finishing third, Montgomery County, fourth, and East Jessamine, fifth. The one different team walked away with the team title and that was Fleming County.

Mackenzie Sierra had Lincoln’s high score in singles competition, placing 14th out of 55 girls with a three-game score of 448. Shelby Johnson bowled a 434 for the Lincoln girls team to place 17th, Faith Godby placed 23rd with 411 and Kaylee Sinkhorn was 32nd with 349.

In the boys individual competition, Cole had the Patriots’ high three-game score of 547 to place 16th out of 63 bowlers. Madison Elliott bowled a 440 to place 38th overall, Antonio Prieto placed 46th with a score of 404 and Isaiah Caldwell placed 54th with 353.

Boyle claimed the top two spots in the boys individual region championships with Parker Price winning the title and Bennett Coffey placing second. The girls individual title at region went to Mashayla Atherton of Corbin and Ashley Hunt of Fleming County was the runner-up.

STEARNS — The McCreary Central boys basketball team did its best to try and upset one of the top teams... read more