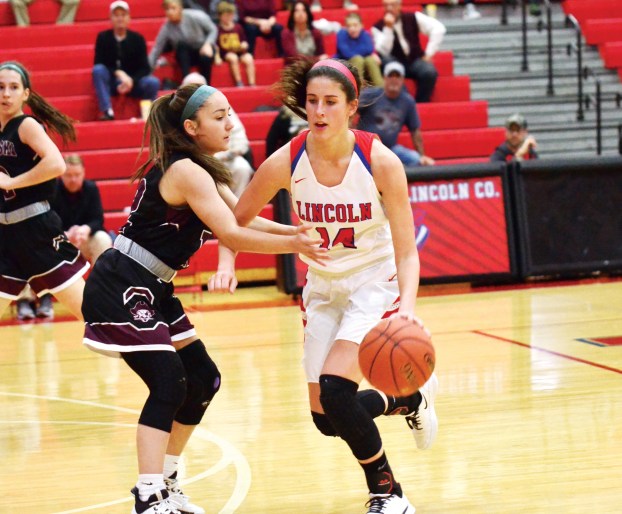 DANVILLE -—The Lincoln girls struggled on the road Friday night, as Danville’s Lady Admirals cruised to a 65-40 45th District win.

Four Danville girls scored in double figures and the host Lady Admirals dominated the boards as they matched their largest margin of victory this season. They did so without second-leading scorer Lara Akers, who was sidelined by an ankle injury, and third-leading scorer and top rebounder Camryn Preston, who is recovering from an appendectomy.

Danville (10-5, 2-0 district) overcame 23 turnovers to defeat Lincoln (7-8, 0-1), which stayed close in the first half thanks to its defense but ultimately paid for poor shooting.

Jenna Akers scored 17 points and Desiree Tandy and Madison Terrell each had double-doubles, and

The Lady Admirals opened a double-digit lead early in the second quarter and broke the game open late in the third quarter and early in the fourth. They outscored the Lady Patriots 15-5 over a span of about six minutes to take a 54-35 lead.

“I thought our defensive effort in the first half was good. We had a lot of deflections, a lot of steals – we had 10 steals at halftime – and our defensive intensity dropped in the second half,” Lincoln coach Cassandra McWhorter said. “But credit to Danville, they finished at the rim and made some big plays. Everything gets a little bit better when the ball goes in the hole.”

Danville shot 49 percent (26 for 53) from the field, while Lincoln struggled to make shots from all points on the floor. The Lady Patriots shot just 33 percent (16 for 49) from the field and were 1 for 15 from 3-point range and 7 for 18 at the free-throw line.

Danville outrebounded Lincoln 42-20. The Lady Admirals also made hay on the offensive glass with 15 offensive rebounds, including five by Terrell.

The Lincoln County Middle School sixth-grade Eagles carried a heavy weight with them on their return home from Lexington Sunday... read more