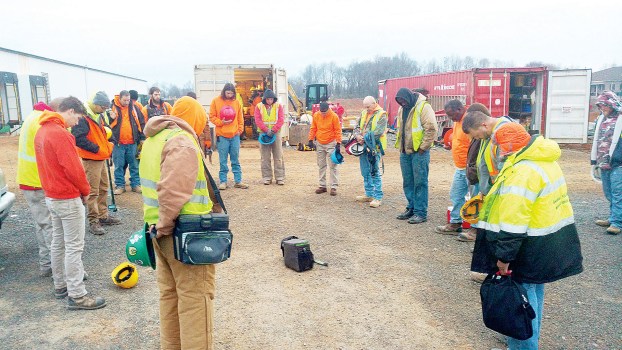 You may have noticed a relatively fresh addition to Stanford: gigantic greenhouses being built off Frontier Boulevard — Kentucky Fresh Harvest. Perhaps not common knowledge about this venture is that it isn’t solely about growing tomatoes.

Part of building a greenhouse operation this grand, is adding much-needed jobs to the local economy. Yet, the project is not simply about investing in the community, but intentionally investing in those who do not fit in elsewhere and need a hand getting back on their feet. That is significant because a portion of Lincoln County’s population, like all of Kentucky, has a history. These are the ones overlooked or avoided, oftentimes written off because what they have done in the past.

Construction supervisor Mitch Lanigan commented that he personally believes that everyone needs a second chance. Furthermore, some people find it difficult to secure jobs not simply because of their record but also due to requirements they have as a result.

Jennifer Alcorn, human resources manager, shared that their company tries to work with employees to meet imposed requirements. It may take extra work to manage special circumstances, but if this company doesn’t — who will?

Unfortunately, not everyone given a second chance chooses to do the right thing. Statistics validate this fact. And, this project has had its share of problems and set-backs since it broke ground. Workers might even share examples of bad behavior and problems seen over the months.

However, some endeavored to see that change. A couple employees conceived a fresh idea: creating a small prayer circle out back to begin each day. The concept was simple: honor God first, claiming the bold statement of Jesus to “seek first the kingdom of God and His righteousness” (Matthew 6:33). Jesus also said, “whoever is ashamed of Me and My words, of him the Son of Man will be ashamed when He comes in His own glory” (Luke 9:36).

With that proclamation in mind, they paused each morning, bowed their head, and acknowledged God: thanking Him for His goodness and blessings, asking Him for safety and protection, and seeking first to honor Him.

Over the months, that tiny prayer circle has grown due to the faithfulness of that courageous few. Morning prayer is no longer small, and it is no longer in the back. Now, each morning, a call for prayer is issued and most workers eagerly join together to honor God. The crew seeks daily prayer time as the official start of their day, and management is agreeable.

So, what is the result of putting God first in the workplace? A project once behind is now back on track and progressing. Perhaps it’s not perfect because no place really is, but the negative has largely been eliminated. It is a jobsite with an undeniably better atmosphere and improved attitude, Mitch explained. Morale has greatly improved, and crew relationships with management and each other are healthier.

There is a direct correlation between the boldness of prayer and change at Kentucky Fresh. The work is undoubtedly hard and the conditions are muddy, cold and wet this time of year, but those willing to put in the effort have found opportunity here. And in this opportunity, the workers are making a conscious effort to put God first. God is on the move.

Everyone should feel safe when attending school board meeting

I need for everyone in Lincoln county to know that I, Gloria Sneed, called the police at the end of... read more