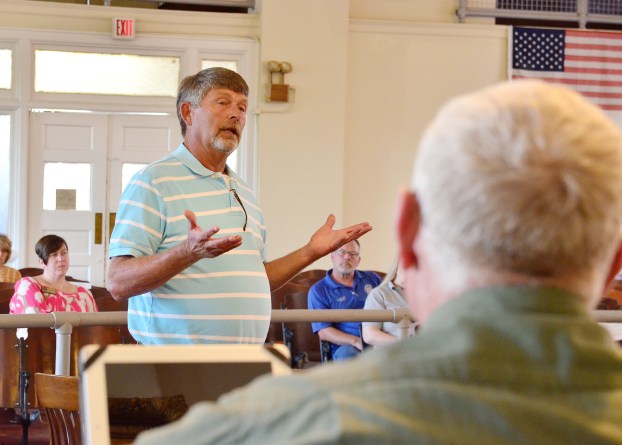 STANFORD — An “old school” method of voting may soon be making a comeback in Lincoln County.

The familiar electronic voting machines that have been used in the county for the past 11 years will likely soon be a thing of the past when the bidding process for new paper voting machines ends.

The new voting equipment is now on the minds of county officials, with County Clerk George O. “Sonny” Spoonamore II bringing bids for the purchase of the machines before the Lincoln County Fiscal Court this month.

“We’ve pretty much always had issues with the voting machines since day one,” Spoonamore said. “I think we got them in ‘08. We have the awfulest time trying to get votes out of them. We get complaints all the time. We spend hours in there after an election trying to get the votes out of the machines.”

Spoonamore used an example of voter discrepancy to emphasize the need for a switch to paper.

“I think it was two elections ago and the pbs (the device put in and taken out of the electronic machines before and after each vote is cast) … We got them back that night and read them. We had totals. We print papers out with the totals also. We compared them. There was 253 votes difference in the pb versus the paper,” he said.

“We didn’t think a whole lot about it but we knew something wasn’t right. So, we read them again the next morning and the pbs that they had cleaned out and set up again weren’t cleaned out. So, we ran them again and got those totals to match what we had on paper. We was good. But the Secretary of State’s office wasn’t good. They called and wanted a hand-written excuse of what happened. So I called the vendor and they said, ‘Oh, don’t worry about them pbs. They don’t matter.’ Well, that’s what we have to scan on an outdated computer that is the only thing that can read them. You can’t use a good computer because it won’t download to it or whatever.”

That voting discrepancy meant for some restless nights for Spoonamore.

“For two nights I was worried to death. You know, what are you going to do? Somebody got beat today and then, two days later, they won by 250 votes or someone got beat by 250 votes,” he said. “That’s my biggest worry at election time. If Daryl (sample name) wins by two votes, I want it to be by two votes. If he gets beat by two … I don’t want any question here or there.”

Spoonamore also related that he had received numerous complaints over the years from voters claiming the electronic voting machines did not always record votes correctly.

“We’ve had people come in and say, ‘Well, I touched the vote here and it voted for the one down below,’” he said. “These machines are not supposed … They’re a scanner.”

With the paper voting machines, voters will be given a paper ballot when they come in to vote. They will then go to a designated area to color it in. There will be a scanner sitting there, which can scan 14 pages a minute. After the ballot is scanned, it is dropped in a box.

There will still be an electronic Help America Vote machine at precincts. The machine, which Lincoln currently has, is for people that have disabilities. The touch screen machine has a blow tube on it and Braille.

Whether Lincoln switches to the new paper voting machines now or not, Spoonamore says it is coming.

“The state is going to all paper. It’s going to happen. Some clerks don’t like it and they’re not real happy with it. They feel like we’re going backwards with paper,” he said. “I do like it. Worse things come to worse, I can pull them out of there and count them if I have to hand count them.”

“We will be going to paper even if it isn’t now because the State Board of Elections is going to make sure that we go with it.”

The first step in making the switch from electronic to paper voting machines occurred at the Sept. 10 fiscal court meeting when Spoonamore opened the two bids submitted on the new machines. The bids from Harp Enterprises and Election Systems & Software were decidedly different, with Harp submitting a bid of $76,000 while E.S. & S.’s bid was $141,000.

“I know this is a lot of money. I understand that, but my hind end’s on the line when it comes to election time to make sure it’s right,” said Spoonamore.

County Attorney Daryl Day said the return on the investment is key.

The earliest Lincoln County voters can expect to see the new voting equipment will be the 2020 May primary. Judge Executive Jim W. Adams Jr. and the court tabled the issue at the meeting, wishing to look over the numbers more closely because of the discrepancy in bids. The issue was further pushed back when it was decided to do a rebid on the voting machines.

“We’re going to rebid because one (Harp) sent the wrong quote. They quoted for old machines where we wanted new machines,” Spoonamore said.

Spoonamore said that he noted a dramatic difference in Harp’s bid from the original quote he got from them before he realized he had to take it to bid. The original bid from Harp was for $212,000. E.S. & S.’s original bid for 18 scanners was $155,000. The bidding asked by Spoonamore is for 15 scanners.

“We want to make sure they’ve got what we’re looking for,” said Spoonamore.

The cost of the new voting equipment will be covered by the county and the County Clerk’s excess fees. Spoonamore said the state told him that “if they did give (money) to the counties that don’t have paper now, they would have enough money for about 50 to 60 percent of what it costs the county.”

When the new bids from Harp and E.S. & S., the only companies that service Kentucky, come in, Spoonamore said each will have a representative on hand to speak to the court on the new paper voting machines and will have a machine in tow to demonstrate.

One of the fiscal court’s first actions under the financial agenda at the meeting was reviewing the 2019 Tax Rates. The court accepted the following tax rates:

In other business, the court approved the following:

• New line item in general fund for Rebecca Newland House. County has now received $400,000 from the state on the stabilization project for the house.

• Appropriation transfers of $15,000 for the Senior Citizens Program, $2,600 to the Rebecca Newland House general fund for storage container and $100,000 to general fund.

• Late bill reimbursement to Dennis Martin for $277.54. Traveled 64 miles round trip at 42 cents a mile to pick up concessions at H.T. Hackney Co. The total for concessions was 250.66.

• Approved resolution of County Code Section 420.3. The state changed the cap on what is required to go to bid from $20,000 to $30,000. Judge Jim Adams said, “This needed to be done. In today’s economy, $30,000 is not a lot of money when you’re talking about materials or automobiles or trucks, anything of that nature, so we have to change our county code.”

• Discussed excavation and repaving project on lots owned by county behind the Buzz Walker building and by the Stanford Presyterian Church. Voted to spend no more than $27,000 on the property.

STANFORD — When SaraGrace Ramlochan decided to enter the 2020 Distinguished Young Women (DYW) of Lincoln County program at the... read more