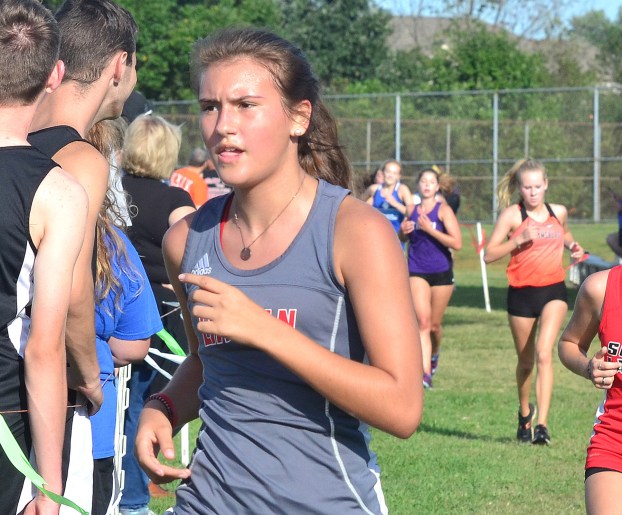 Photo by Nancy Leedy THE ENTIRE field of runners was at Ava Morgan’s back in the Lincoln County All-Comers Meet Thursday. The sophomore runner won the girls varsity 5K in a time of 24.08.

STANFORD — It was a blue-ribbon kind of day for the Lincoln County Lady Patriot cross country varsity Thursday as the team dominated its own Lincoln All-Comers meet.

The Lincoln girls were led by the 1-2-3-4 punch of Ava Morgan, Constance Johnson, Alexis Slone and Shayley Reed, who claimed four of the five top spots in the girls’ 5K varsity race.

Pacing the Lady Pats in the successful run was Morgan, a sophomore, who finished at the front of the 18-runner field. She was all alone at the finish, covering the 3.1-mile distance in 24:08. Johnson, also a sophomore, finished as runner-up to her teammate, crossing the finish in 25:18. Slone, a freshman, and Reed, a junior, followed them in in the third- and fourth-place spots. Slone was third in 25:33 while Reed ran fourth in 27:11.

The finishes of each team’s top five runners are used to determine the team winners. Jasmine Steele, an LCHS senior, rounded out the Lady Pat top five by placing eighth in a time of 29:30.

While the finish of Lincoln’s first five runners would have insured a winning finish at most races, it was a given pre-race that the Lincoln girls would win the team competition as the host Lady Patriots were the only team out of six teams participating to field a full 5-man team. Somerset came close with four runners on course. Also participating in the girls varsity run were Garrard County, Russell County, Danville Christian Academy and Bluegrass United.

The Patriot varsity scored five Top 15 finishes in the home meet, led by eighth-grade runner Elijah Hoot Johnson who finished sixth out of 33 runners in a time of 21:35. Senior runner Gabe Singleton finished right behind Johnson in seventh place. His time was 23:00.

Lincoln, which was one of two full teams on course, finished second out of the two teams with 33 points. Russell County won the boys team competition with 22 points. Other teams represented were Garrard County, Somerset, Kentucky School for the Deaf and Bluegrass United.

Garrard County senior James Ward won the boys varsity 5K in a time of 18:58. Justin Stearns and Tyler Lulek, both juniors at Russell County, finished second and third, respectively. Stearns’ time was 19:19 and Lulek’s time was 20:12.

In the girls middle school 4K, Lincoln also delivered a 1-2 punch. Abigail Bastin notched another win by finishing almost two minutes ahead of the second-place runner in 17:13. Teammate Olivia Sousis claimed the runner-up spot with a time of 19.22.

Lincoln automatically earned the team win as the only full team out of six teams on course. Lincoln’s other scoring runners were Shelby Smith, Alayna Bodner and Jae Cox. Smith finished fourth overall out of 20 runners in 21:04, Bodner ran sixth in 21:42 and Cox was eighth in 23:06.

There were seven teams represented in the middle school boys 4K and Lincoln came out on top of the three full teams, winning with 19 points. Danville Christian Academy was second with 38 points and Garrard County was third with 67 points.

The Lincoln middle school boys claimed three of the Top 5 spots, with Andrew Pence leading the way with a time of 17:05 to place him third out of 29 runners. Braylan Whitehouse and Ramsey King came in right behind him in fourth- and fifth-place, respectively. Whitehouse crossed in 17:21 and King came in in 17:38. Rounding out Lincoln’s scoring runners were Keagan Steele and Brady Dotson. Steele ran 10th in 19:06 and Dotson was 13th in 20:16.

All of the Top 5 spots in the boys middle school race were actually claimed by Lincoln County runners, while not Lincoln students. Brody Blanton and Jacob Liddle, running for the Lake Cumberland Runners, clinched the top two spots, with Blanton winning the 4K in 15:18 and Liddle right behind him in second with a time of 15:21.

LONDON — For the second time in three weeks, the Lincoln County football team has fallen in overtime – and... read more