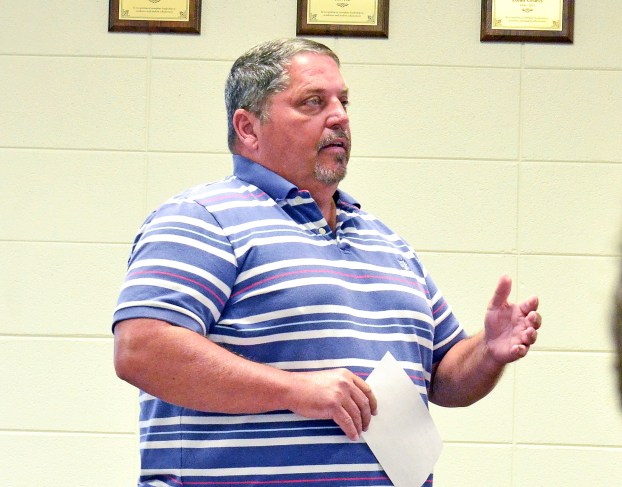 Photo by Nancy Leedy LCHS ATHLETIC DIRECTOR Tim Estes details some of the monetary numbers related to handling the sports program at the school. Estes had proposed an increase of the gate fee from $5 to $6 with elementary-school age children admitted free with a paying adult.

STANFORD — Lincoln County High School Athletic Director Tim Estes did not get the $1 increase in gate admission fees for regular-season sports that he had proposed during Thursday’s meeting of the Lincoln County School Board, but he still left the Student Support Center with a smile.

In his proposal to increase gate prices from $5 to $6, Estes also asked that admission be charged only for adults and students in grades 6-12, with elementary-school age children admitted free with a paying adult at all regular-season sporting events.

While the Board voted to keep the gate price at $5, it did approve admitting elementary-school age children free with a paying adult.

Estes, who said it had been well over 15 years since there had been an increase in LCHS admission prices, presented some jaw-dropping numbers when presenting his proposal to the board.

“Just listen to this number — $14,430. That’s what it’s going to cost us this fall just to pay our officials,” he said. “$14,430 for (home) football, soccer, golf, cross country and volleyball. Every year the association sets prices and they keep going up. We’ve got to keep pace. Also, we pay gate workers at football and basketball games. It just keeps going up and up and up.”

“Every time you see a soccer game going on, $335. Every single time we have a soccer game it’s $335 for officials. We had one game last year, a boy/girl doubleheader, that we made enough money to pay for officials. If it weren’t for football and basketball making the money, just like it is at just about every other school, then our officials probably wouldn’t get the pay. Now, we’ll break even sometimes. We get close for some of what’s called the minor sports to making that to pay the officials. But it just keeps getting higher and higher and higher.”

After Estes’ proposal, Board member Alan Hubble sought clarification of the dollar amount he mentioned.

“That’s just for this fall. That doesn’t even get into basketball, baseball, softball. I’m just talking about football, soccer, golf, cross country and volleyball,” answered Estes. “Last year in the spring I added up what basketball, baseball and softball came to and I believe that was right around $12,0000 or $13,000. The only way we have to pay those officials is with gate fees. We don’t take the money that the board gives us for our budget to pay officials.”

Following the last sentence of Estes’ answer, Hubble and fellow Board member Ethan Jones both expressed that they understood the money already budgeted by the Board for athletics went toward paying officials.

Estes explained that the $50,000 Board allotment did not go to paying officials but rather for LCHS sports teams, payment of transportation (drivers), and membership fees. The breakdown was $23,500 split among the 20 active sports at LCHS, $4,000 for athletic uniforms account and $22,500 for payment of transportation and fees ($19,781.24 for transportation/custodial overtime and $2,718.76 spent on travel to coaches’ clinics/tournaments/etc). The $22,500 is left in an account at the board office.

“If you would like to take care of all of our fall, winter and spring officials, we would gladly accept that,” said Estes.

“How much extra is it going to be when we go to the middle school, too? I mean, we’ve got to be fair for one or the other,” said Hubble. “We are the poorest county within five districts here and we’re wanting to raise it so our kids can’t go to the ball games. I understand that you’ve got the cheap season prices (season sports passes). I’m trying to make a way here. If there’s a way we can pay for it, we’ll just pay for it and leave the price the way it is.”

Estes, who noted that Boyle County, Danville and Garrard County had already approved raising their gate to $6, said he would have to do “some bigtime figuring” to determine how much extra it would cost to leave the gate at $5 and cover the cost of officials.

“Just the fact that other schools within this area say they want to do it … I understand the finances, but have we exhausted other ways to make it work?” questioned Board member Win Smith.

School Superintendent Michael Rowe said he would love to admit all kids free to sporting events.

“I’d love to see us get to the point where all kids got in free as a Board. But that would mean we’d have to ante up some money because the high school and middle school would need us to offset that amount,” he said. “But I don’t think we should get to the point where we couldn’t let kids in because of money. I don’t know what your all’s thoughts are on that. Other districts I’ve been with we’ve done that and our attendance actually went up because more parents came with those kids. I don’t know what dollar amount you’d put on this.”

Estes said that if the Board wanted to leave the gate at $5, he could easily accept that.

“To be honest with you, $5 makes it so much easier on the gate workers,” he said. “If you want to leave it at $5 and you want to allow elementary kids in for free …. Our gate workers will be ecstatic. If we get into a mess to where we’re not going to be able to make it financially to pay our officials and things, I can come back and say, ‘We need an extra $10,000 to get through the rest of the year.’ We’ll work hard to sell the passes and if we get in a bind ….”

The motion made by Hubble that the gate remain at $5 and elementary school-age children be admitted free with a paying adult was approved unanimously with Tom Blankenship, Ricky Lane, Hubble, Jones and Smith all voting yes.

Elementary-school age children won’t be the only Lincoln students getting free admittance to LCHS sporting events. Starting this season, every athlete on a Lincoln County High School roster is getting a free pass for the entire year, that includes any middle school athletes that play up on a high school roster.

In addition, the LCHS Athletic Department also has discounted season passes for sale. The school offers a season pass of up to five people in the same family for $125, an adult season pass for $50 and a $25 pass for students in grades 6-12, senior citizens age 50 or above and veterans. These passes are good for every single home event with the exception of the Death Valley Bowl and postseason tournaments.