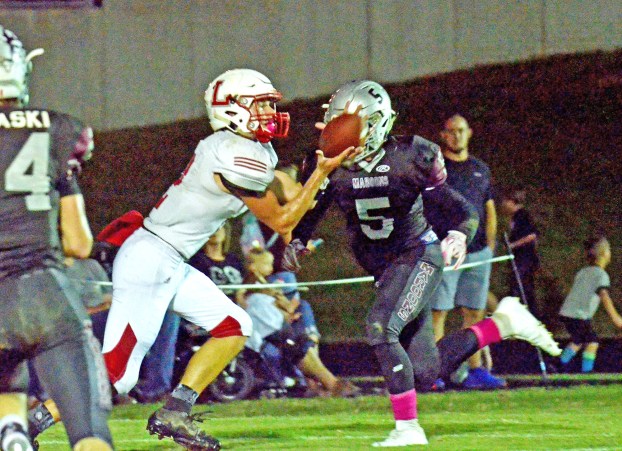 File photo by Nancy Leedy NICK HARRIS pulls in a touchdown pass in football action at Pulaski County last season. Harris, a senior, and his Patriot teammates will be on hand at Saturday’s pig roast.

With the 2019 gridiron season fast approaching, fans will get their chance to talk shop with Lincoln County football coach Spencer Crutchfield and the Patriot football team at the annual Patriot Pig Roast.

The fundraiser to benefit the LCHS football program is scheduled for this Saturday, Aug. 17, at 6 p.m. in the LCHS cafeteria.

The Patriot Pig Roast provides fans the best opportunity to meet and greet the newest squad of Lincoln football players, coaches and staff before the 2019 season begins.

The event, which is hosted by the Lincoln Football Boosters, will include a meal for $10 per person. Tickets can be purchased from any football player and will be available at the door.

The menu includes a pulled pork sandwich, baked beans, cole slaw, dessert and a drink. Hot dogs and chips will also be served for the kids.

The Patriot Pig Roast is the second of two football events scheduled for this week. Tonight (Thursday) the football team hosts Garrard County in a scrimmage at 5:30 p.m.

There is no admission for the scrimmage, but the booster club will be accepting monetary and non-perishable food donations for victims of the gas pipeline explosion in Moreland.

Lincoln opens the 2019 season on Friday, Aug. 23 in the PBK Death Valley Bowl. Lincoln will host Woodford County in the first game of the doubleheader at 6 p.m. In the second game around 8:30 p.m., Wayne County will take on Shelby County.

The Lincoln County Middle School girls basketball teams experienced some ups and downs during the first week of the 2019-20... read more