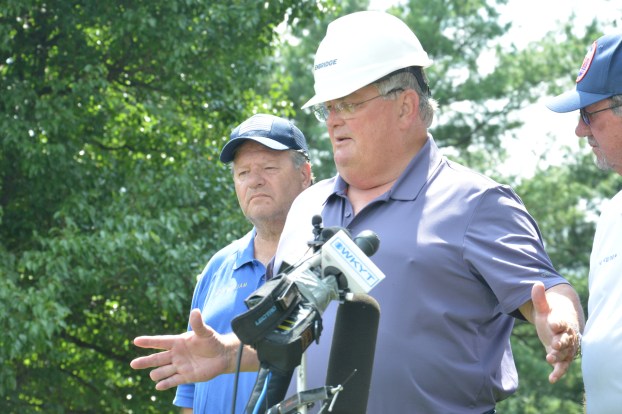 The last inspection of Enbridge’s Texas Eastern gas pipeline system may have been about four years ago, according to Jim McGuffey. He’s an incident commander with Enbridge who participated in a press conference Thursday after the company’s pipeline explosion resulted in one death, several injuries and the total destruction of at least five homes and multiple other structures in the Moreland community of Lincoln County.

McGuffey was not able to be reached by deadline for comment.

According to the company’s website, the pipeline system can transport 11.7 Bcf (billion cubic feet) per day of gas, extending from the Gulf Coast of Texas to the Northeast, through Ohio, Pennsylvania and New York.

This is the second incident this year — the same pipeline exploded in Ohio in January. A Reuters.com story says the explosion injured two people and damaged homes.

Enbridge posted update messages on its website, saying it is “continuing to respond to the incident,” and that the National Transportation Safety Board “has assumed control” of the site. “The NTSB is investigating the incident and Enbridge is supporting that investigation,” and the company has “mobilized emergency response personnel and resources to the site, and we are continuing to work alongside first responders.”

During Thursday’s noon press conference, McGuffey said the area contains three different pipelines, all 30 inches in diameter and located five feet below ground. He said the company’s pipelines in the area “had a sufficient amount of covering to protect them from heat.”

Thursday, McGuffey said the company stopped the flow of gas in the pipeline that ruptured, and “dramatically decreased the pressure” in the other two pipelines while the investigation is ongoing.

Other federal agencies were also on the scene, authorities said, such as the FBI and ATF — which is protocol when there’s an explosion.