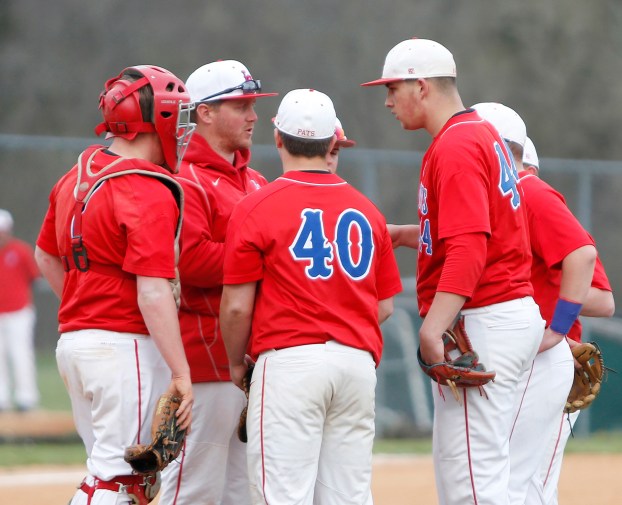 Photo by Nancy Leedy TEE ELLIS, second from left, goes to the mound to talk with his pitcher and infield in this file photo.

The LCHS Bat Patriot baseball team will head into a new era next spring as third-year head coach Tee Ellis announced his resignation from the position earlier this week. He has accepted the head coaching position at Garrard County High School.

Before accepting the head coaching position, Ellis was an assistant coach for four years under Brad McNew and Daryl Day. He had an overall record of 20-75.

He enjoyed his most successful diamond season in his first year as head coach, taking the Bat Patriots to the finals of the 2017 12th Region Tournament. Lincoln, which was edged 7-6 by Boyle County in the 45th District championship game, fell to the Rebels in the regional final.

Ellis’ final game with the Bat Patriots was an 11-2 loss to Boyle County on May 18 in the semifinals of the 45th District Baseball Tournament. The loss capped off a 30-game season which produced only two wins.

Lincoln would win only five games in Ellis’ final two seasons, finishing 3-27 in 2018.

Hodge to bowl for CU-Harrodsburg