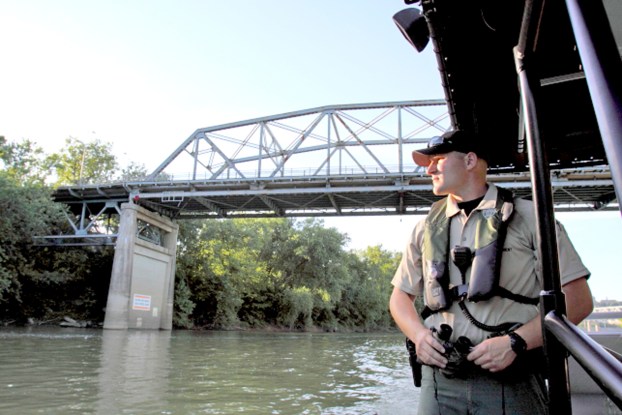 FRANKFORT, Ky. (June 27, 2019) — In an effort to educate the public about the dangers of boating under the influence, conservation officers with the Kentucky Department of Fish and Wildlife Resources are joining other law enforcement agencies for Operation Dry Water, a national campaign promoting boater safety July 5-7.

Increased law enforcement presence around Kentucky’s lakes and rivers will serve as reminders for people not to boat impaired – the leading contributing factor in recreational boating deaths.

“The overall goal of our officers is to make sure our waterways are safe for our families,” said Col. Eric Gibson, director of law enforcement for Kentucky Fish and Wildlife. “We will have enhanced patrols and increased vigilance for dangerous boaters on our waterways.”

A new law signed by Gov. Matt Bevin earlier this year gives conservation officers added authority to crack down on boating under the influence in Kentucky. The new law, which takes effect today, allows officers to make a boating under the influence arrest based on probable cause of operator intoxication, when an accident has caused property damage or physical injury.

Persons arrested for boating under the influence may be subject to 24 hours detention for a first offense and 48 hours for a second offense.

According to the U.S. Coast Guard, alcohol use is a leading contributor in fatal boating incidents nationwide. Where the primary cause is known, alcohol is cited as the leading factor in 19 percent of boating deaths across the country.

Operation Dry Water is an annual event coordinated by the National Association of State Boating Law Administrators, in partnership with the U.S. Coast Guard and various other law enforcement agencies. Since its inception in 2009, participating officers across the country have removed more than 3,500 impaired operators from the nation’s waterways during this event.

For Kentucky Fish and Wildlife conservation officers, reducing the number of intoxicated boaters is critical.

“We want everyone to enjoy Kentucky’s waterways over the holidays and throughout the summer but safety remains our top priority,” Gibson said.

By Derek Brightwell and Nancy Leedy DANVILLE — Lincoln County sports fans may not be familiar with his name, but... read more