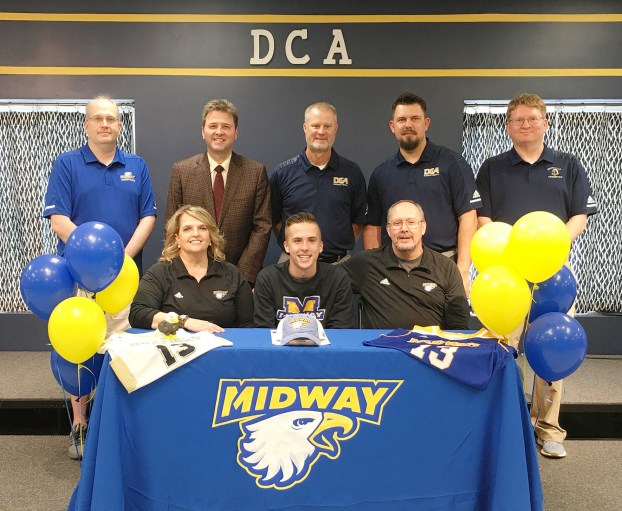 Photo submitted PRESTON CARTER, front center, is surrounded by his parents, Sandi and Sonny Carter, his DCA coaches and administrators and Midway coach Joe Krupinski as he announces he will be attending Midway University.

By Derek Brightwell
and Nancy Leedy

DANVILLE — Lincoln County sports fans may not be familiar with his name, but Preston Carter has become one of the most recent Lincoln County athletes to take their game to the collegiate level.

Carter, who lives in Hustonville, attended Lincoln County public schools until his senior year when he enrolled at Danville Christian Academy. He became a standout basketball player under coach Don Story in his final high school year and that effort drew the attention of Midway University, and now he is set to play for the Eagles.

“Preston thanks all his coaches from AAU, little league, middle, and high school,” DCA said in a press release. “In honor of his senior year where he played for the Danville Christian Academy Warriors varsity basketball team, Preston says he will always be a warrior for Christ.”

Midway University is a member of the National Association for Intercollegiate Athletics and plays in the River States Conference. Last year, it finished a school best 12-16, with a 5-13 conference record in its third year as a program.

Carter hopes to help the Eagles, who have improved their record every year, continue that upward trend and get them their first winning season.

“We are always in search of players for our program who are going to push themselves and their team to be better and who will be great representatives of Midway, both on the court and off,” Midway coach Joe Krupinski said of his incoming freshman. “Preston certainly fits that criteria. He has shown a great desire to compete at the next level and to be the best player, student and person he can be. His energy and work ethic should be great additions to our program at Midway.”

Carter is the son of Sonny and Sandi Carter of Hustonville.

Winning a tradition for Baughman brothers

Tennis is often promoted as a “sport for a lifetime,” and it’s proving to be that way for brothers Henry... read more