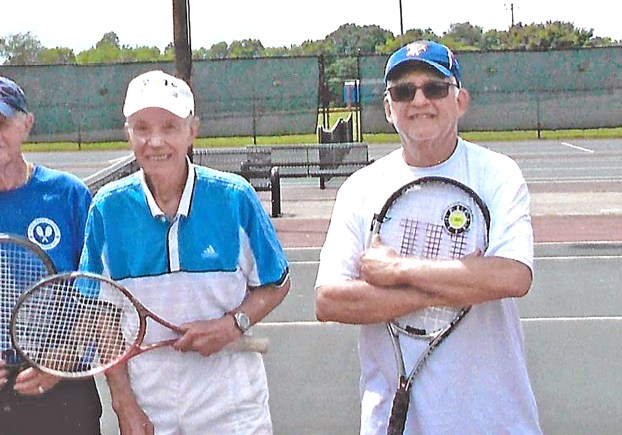 Winning a tradition for Baughman brothers

Tennis is often promoted as a “sport for a lifetime,” and it’s proving to be that way for brothers Henry Baughman and Jim Baughman of Stanford.

The siblings took up tennis racquets as youngsters and today they compete in the 80 and Over and 75 and Over senior tennis divisions – often with winning results.

Winning for the Baughmans began in May of 1953 when Henry, at age 15, and Jim, then 14, won the regional title while playing for Stanford High School. The two added four more regional titles (singles and doubles) over the next two years.

At that time, there were only four regions in Kentucky.

Jim Baughman continued the winning tradition in college, playing at No. 1 for the University of Kentucky tennis team. He had the best records on the team all three years he played.

Henry Baughman’s college time was interrupted by three years of military service but he still continued to play, occupying the No. 1 position on the Army team. After completing service, he became a radiology tech in Murray and simultaneously enrolled in classes at Murray State University. He helped the MSU tennis team win two Ohio Valley Conference Tennis Championships.

Henry continued to play competitively as an adult but Jim took a hiatus from the sport for about 50 years as he became a minister of several large churches.

In 2008, at the age of 70, Jim returned to competitive tennis with Henry. Since that time, the local duo has not lost to any Kentucky team in a sanctioned age-division tournament.

Currently, Henry is also No. 1 in 80’s singles and, for the past two years, Jim has been No. 2 in 75’s singles. In addition, Henry has been ranked in the Top 5 of his age division in singles and doubles in the 11-state Southern Tennis Association for many years.

Over a seven-year span, from 2007 to 2013, Henry Baughman received a letter from the United States Tennis Association saying, “You have met the qualifications to represent the United States in international competition. Would you be available to play, if selected?” He replied, “Yes,” each time but was never selected.

According to Henry, he did have singles’ wins over two that were selected, and defeated Australia in international play, but he said their overall record was better than his.