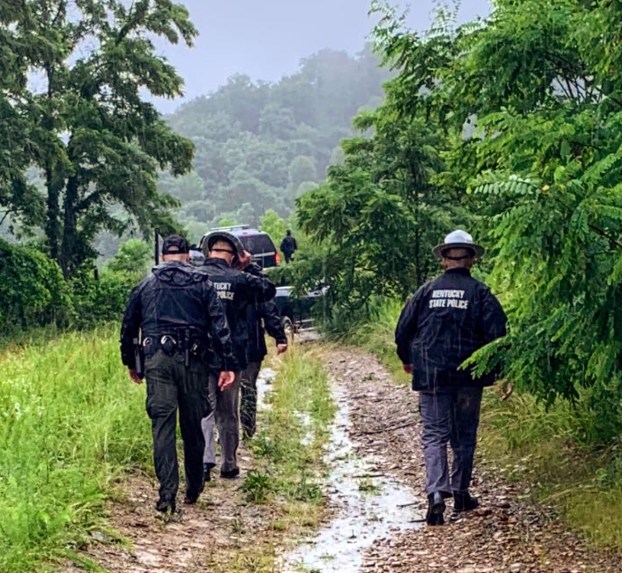 Photo courtesy of Stanford Fire Chief Scott Maples Kentucky State Police troopers walk in torrential rain in Lincoln County as they search for a fisherman who was reported missing from the Stanford Reservoir area.

UPDATE as of 2:04 p.m.: The man reported missing has been safely located, according to Lincoln County Emergency Management Director Don Gilliam.

STANFORD – Lincoln County authorities are currently searching for a man they say was reported missing from the old Stanford reservoir area early this morning.

According to Lincoln County Emergency Management Director Don Gilliam, all available units of the Lincoln County Search and Rescue team have been asked to respond to the area on Ky Hwy 698.

Chase Marcum and his bloodhound Meshak, who is trained in human tracking, arrived on scene at about 1:30 p.m.

A rescue boat, along with ATV’s and a drone have all been deployed to assist in the search, according to Stanford Fire Chief Scott Maples. Kentucky State Police are also on scene.

Gilliam said the missing man, identified as Bobby Crawley, 47, was fishing in the area but was reported missing after he did not return home.

“His last known location (was) out here at the Stanford Reservoir at about 3:30 a.m. or 4 a.m. this morning, and that’s all we know,” he said. “We’ve got people on the ground, four-wheelers, dogs coming and we’ve got a boat on the water.”

This story will be updated as additional information is made available.

STANFORD – It’s that time again. Time for the Lincoln County Chamber of Commerce to recognize a new group of... read more