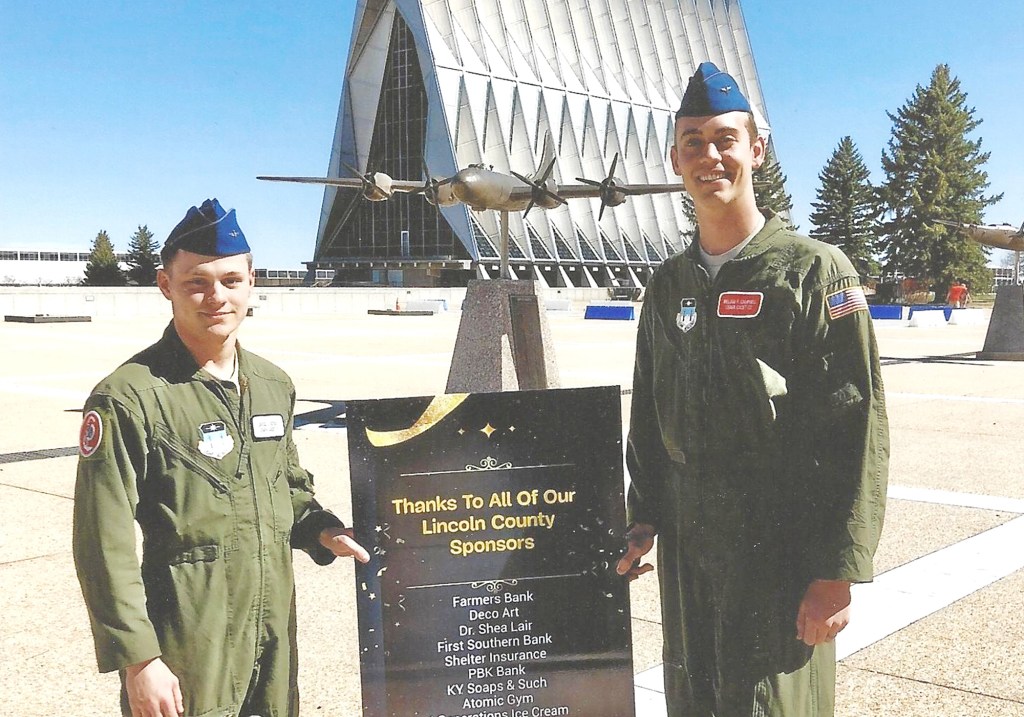 While most college students consider full-time to be 12 credit hours, USAFA students are required to take no less than 18 credit hours while many are taking up to 23, all being extremely advanced classes. In addition to their studies, the cadets have military duties as well and are required to participate in either a sport or an extracurricular club. Each day starts at approximately 5:30 a.m. and most cadets do not finish their day until after 8 p.m. – and then it’s time to do homework.

Falcon Families of Kentucky (FFK), which is made up of parents and families of Kentucky cadets attending the Air Force Academy, was able to provide their loved ones a few hours of escape from their packed routine, allowing them to relax among their home state comrades and enjoy good food and music while having the opportunity to win some exciting prizes at the April 20 Kentucky State Night event.

Included among those 45 Kentucky cadets are two of Lincoln County’s own, C4C Reed Campbell of Stanford and C3C Jarod Hodges of Waynesburg. Campbell and Hodges, who received their appointments at the same time, are the first Lincoln County students to be accepted into the USAFA since 1990.

Eight parents flew into Colorado Springs and spent a couple days preparing goodie bags and setting up Arnold Hall for the event. Each cadet was allowed to invite one guest and approximately 60 cadets began arriving at 5:30 p.m. for the catered barbeque dinner. Upon arrival, each attendee received a Falcon Family t-shirt and each Kentucky cadet was presented an Inter-County Energy string bag filled to capacity with items all made, grown or manufactured in Kentucky, from duct tape to Kentucky beef sticks and Ale-8-One to lip balm made from soybeans and soap made from goat’s milk.

Each guest was also presented 20 “Derby Dollars” which they used to win numerous prizes throughout the night. Some of the prizes included Ray Ban Aviator glasses, Air Pod headphones, Epic ski passes, an Apple watch, a Nintendo Switch game console and many other prizes. All prizes were made possible by generous donations collected by FFK members.

The FFK event provided Kentucky’s sons and daughters a nice break before they entered their spring finals.

“We are so very grateful to all of the local businesses and organizations that generously donated in order to help us sponsor this fantastic evening,” Jennifer Campbell and Barbara Hodges said on behalf of FFK. “Lincoln County really stepped up to the plate with donations and our cadets really appreciated it!”

USAFA is one of five military service academies located in the United States. The other four are the U.S. Naval Academy, the Military Academy at West Point, the U.S. Merchant Marines and the U.S. Coast Guard Academy. All five academies offer a free, top-notch college education and, at the end of the four years, each cadet will graduate as a second lieutenant in the U.S. Military. In return for the four-year education, each graduate will dedicate a minimum of five years to military service.