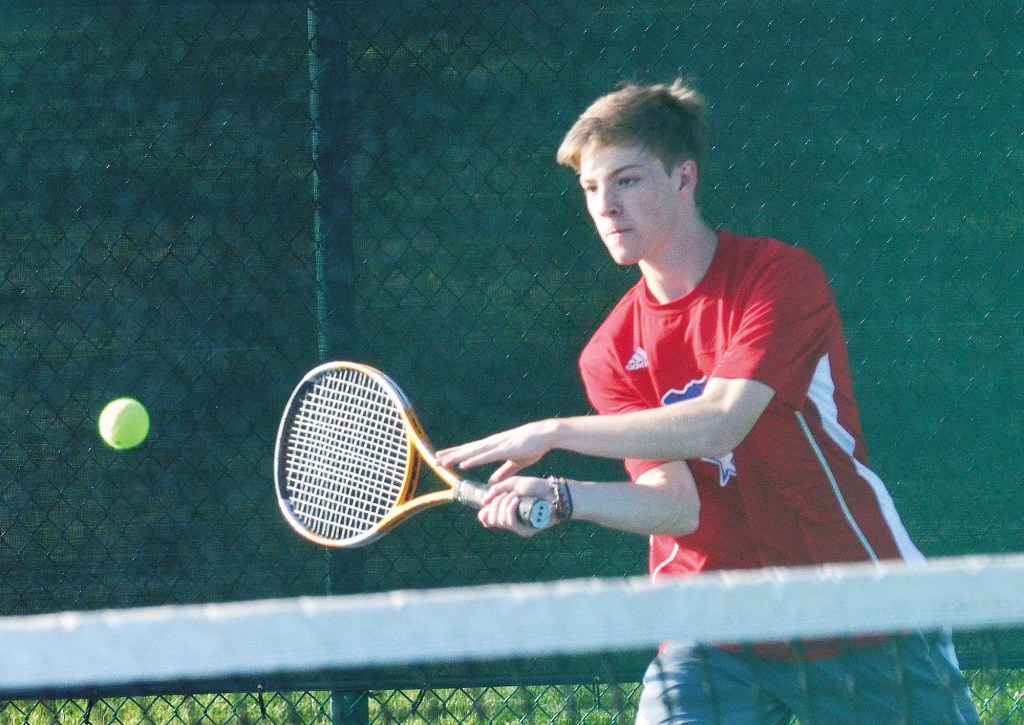 Photo by Nancy Leedy CARTER STORY is the senior half of Lincoln’s senior/junior doubles team of Story and Kade Bandura. The duo is ranked 7th in the regional tournament.

STANFORD — The Lincoln County High School tennis teams look to extend their seasons as they take part in regionals in Danville.

The 12th Region Girls and Boys Tournaments get underway on the Centre College and Danville High School courts, with the girls taking the courts first today (Thursday) and then the boys coming on Friday.

Lincoln has one seeded team among the field of 24 doubles team, with senior Carter Story and junior Kade Bandura moving up a spot this postseason, ranked No. 7 at Monday’s seeding meeting. The Patriot duo advanced to the quarterfinals before exiting last year’s regional tourney.

As the No. 7 seed, Story and Bandura earned a bye through Friday’s first round. They will take on the winner of the round one match between Andrew Haggard and Christian Campbell of West Jessamine and Justin Anderson and Garrett Strunk of McCreary Central.

Twelve Patriot and Lady Patriot athletes will be in action at regionals, with two doubles teams and two singles players from each squad. Gavin Fowler and Colin Green are the Lincoln boys other doubles team and Baylor Mattingly and William Hawkins will play singles. For the Lincoln girls, the doubles teams are Raelyn Amon and Kaitlynn Wilks and Grace Muse and Emily Byrd while Savanna Smith and Alyea Towle are playing singles.

Towle and the Muse/Byrd doubles team sit at the top of the brackets and should be the first Lincoln athletes seeing action today. Towle will take on Sydney Arnold of Garrard County in the first round. Should Towle advance, she would then play the tourney’s top seed, Rebekah Trent of Mercer County. Muse and Byrd will face the tourney’s No. 6 seed, Boyle County’s Whitney Bean and Lainey Robbins, in their first-round match.

Smith’s first-round match puts her up against No. 5 Molly Demrow of Casey County and the Amon/Wilks team will battle the No. 7 team of Abi Crew and Bekah Cochran of Casey County in its opening match.

Like Towle, Mattingly could be facing the tourney’s top seed early in the tournament. He drew Danville’s Jacob Prewitt in Friday’s opening round and the winner will play No. 1 seed Amin Katanbaf of Somerset.

Lincoln’s other singles player, Hawkins, will play Clark Lemon of Southwestern in his regional debut. And in doubles action, Fowler and Green will take on Pulaski County’s Gavin Spradlin and Adam Reynolds.

The top eight seeds in each division at region are: