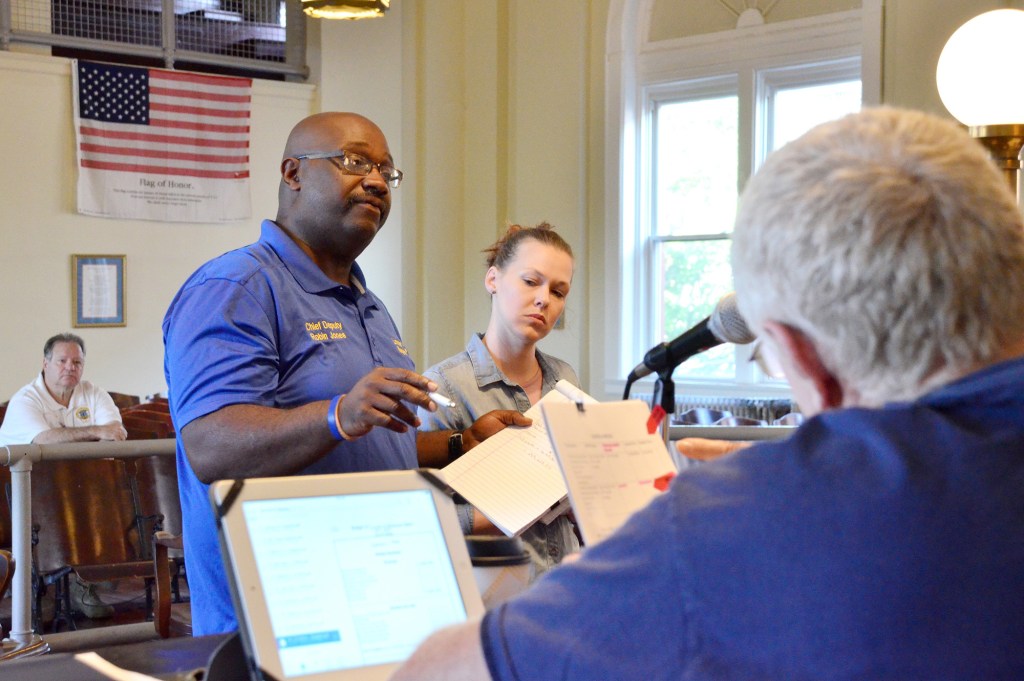 STANFORD — The Lincoln County Fiscal Court approved a new medical contract for the Lincoln County Regional Jail at its recent meeting, which includes adding a full-time registered nurse to the jail staff.

“Medical is farmed out now,” Lincoln County Judge Jim W. Adams Jr. said before discussion began. “We tried to do it in-house before (former Jailer David) Gooch left. There was a move to go to a private company to do the medical for obvious reasons, mainly liability. Now Rob (Wilson – jailer), Robin (Jones – Chief Deputy) and Brittany (St. Lawrence – Administrative Director) have decided that it needs to be bid out.”

Jones and St. Lawrence presented the bids for the jail’s medical care, including the current provider, Advanced Correctional Healthcare (ACH), which submitted a bid of over $259,000.

“This will be with a full-time 40 hours R.N. It goes up a significant amount,” St. Lawrence said as she presented the ACH bid. “Now with Advanced, we’ll also have to pay an additional $16,419 for their automatic electronic medical records. So you’re looking at Advanced Correctional Care with a 40-hour nurse, with a R.N., is $259,625 roughly. That’s going with the same providers we have.”

“Right now we’ve got an LPN for 25 hours a week. That is what we’ve got,” Jones chimed in.

St. Lawrence noted that the ACH bid still contains a $20,000 pool as a safety net for overages.

The second bid presented was from Quality Correctional Health Care (QCHC), based out of Alabama, and was for just over $219,000.

“Now with QCHC, they have bid and the electronic records is in with this bid. We do not have to pay extra for that,” said St. Lawrence. “And for $219,600, it comes with CPR training. It comes with electronic files. And it comes with 40 hours for R.N. nurse. There is no pool included in this, but we could always, and what the jailer would like to do, is add a $20,000 pool just to get us started to see if we do need it or not. We don’t always have to use it.”

St. Lawrence added that the QCHC bid also comes with an EKG machine included so that it will be on-site, and she “feels like it’s significant.”

Jones confirmed the importance of having an EKG machine on-site.

“Most of our medical costs from the jail, about 50 percent of them, are cardiac,” he said. “With this EKG, that’s going to cut down on us taking them by ambulance to the hospital for them to put them on an EKG monitor. We can do it in-house with our nurse and our medical staff that we have.“

Jones recommended accepting the QCHC bid because Wilson, St. Lawrence and himself felt “that’s the best direction to take the county in at this time.”

“With the difference in the Advanced contract and the QCHC, with that pool we don’t have without Advanced, we’re going to be saving so much money that what we’ve decided to do is, for the first year, if we do get to go with QCHC, is put that $20,000 in the pool just in case we need it. We’re still going to be saving a significant amount of money by switching the provider,” said Jones.

“With our count and how it’s been running. In years past, we’ve been running with the LPN about five hours a day, five days a week. With our count, you and I both know that’s not enough medical for 160 inmates. So what we really need is a full-time 40-hour a week, registered nurse to fill our needs that we have right now.”

Jones and St. Lawrence agreed that an R.N. and an EKG machine will cut down on a lot of the jail’s medical expenses. QCHC could also reduce expenses in another way.

“QCHC is going to work with us on having contracts with the hospitals where they only charge us the Medicaid price. That’s also going to be beneficial,” said St. Lawrence. “Of course, we’re going to have to talk to them about it because it’s still up in the air. But there’s a lot they’ve talked about to where we feel like they are the best choice for us.”

QCHC said it would send quarterly reports to the county to show expenditures.

Before a motion could be made on which bid to approve, magistrates David Faulkner, Lonnie Pruitt, Jeff Ruckel and Joe Stanley heard from Jailer Rob Wilson.

“One of the things we factored in also on this decision is … Above and beyond this medical contract, we’ve had huge amounts of numbers in staff hours. Just beyond the medial contract, we had to take those other numbers and add it to these numbers,” he said. “Just man hours alone at hospitals is absolutely going to tear our budget to pieces because, right now, with Advanced only having an LPN five hours a day, our staff is having to make a lot of those medical calls after that five-hour block. And that’s generally when those hospital trips happen.We had to add our man hours to the overall cost of this contract and take that into consideration.”

Inmates are not covered by insurance while incarcerated, so all responsibility falls on the county to cover medical costs. Wilson said that medical costs are already high and something as basic as a cut hand can lead to an emergency room trip with “a chest x-ray and who knows what else” thrown in.

He said the drug epidemic and diseases that come with and the lack of personal hygiene among other things make medical bills a big issue.

“It just comes down to basic human decency. We need better medical care in this jail because it’s going south quick,” Wilson said. “This is just an attempt to bring things back inside, step it up a little bit and cover everybody’s backside when it comes to medical issues.”

“I see savings and a drop in our overall liability … I’m really impressed with this company (QCHC). I think we should give it a shot.”

The fiscal court unanimously approved the acceptance of the Quality Correctional Health Care bid of $219,600 with an added $20,000 pool as a safety net.

Before approving the medical contract bid, magistrates also approved transfer of some funds from the jail fund after a report from the county’s auditor.

“In our 2017-18 audit, the jail got gigged with one thing. We got gigged for a few minor things, but it was a great audit all the way around,” Adams said. “Very proud of our staff, both the financial staff and the jail staff, parks and road department. They all did a great job.”

Adams added that there “is one thing we have to get cleaned up” concerning the audit and the jail. To relay how “nit-picking the auditor’s offices have become,” Adams told the story behind the needed fix.

To remedy the situation, the court made a motion to and approved the payment of $3,490 to the canteen fund from the jail fund.

In the next order of business, the court approved hires for the William Whitley House Historic Site. The part-time hires were Martha Francis and Jane VanHook for inside the Whitley house and Kyle Alexander and Donnie Siler for yard/lawn maintenance. Each is hired at a rate of $10 per hour with a maximum of 100 hours per month. No benefits included other than social security and Medicare.

VanHook’s hire is retroactive to April 3, Francis’ to April 11, Siler’s to April 15 and Alexander’s to April 17.
The WWH hires prompted Magistrate Stanley to question what other costs there would be pertaining to the Whitley property.

“We’re going to have some pretty significant costs to begin with,” Adams said. “I’ll give you a rundown of what’s happened. The state had kept up the house in pretty decent condition, the William Whitley House itself. They had let the caretaker’s house go. It was nice on the inside, don’t get me wrong, they hadn’t let if fall down. But the septic system had to be reworked. It’s strange. We had to figure out what was going on.”

“There was a water leak. We got that fixed. We had the septic pumped out, two loads. We’re ordering a building … about a $5,000 expenditure. All the tools that they left and they left all the tools, a lawn mower, golf cart, weed eaters, leaf blowers. So we’re going to have a storage building to put those tools in. The (caretaker’s) house will be lived in by Rob Oney. There is a list of responsibilities for him to do, him and his wife.”

“So costs? We don’t know the initial cost exactly,” said Adams. “We’re getting closer because we’ve about got everything done.”

“We just don’t want it to get out of hand,” Stanley said.

“Oh, I understand,” Adams answered. “I think it’s going to be a good addition to our county’s properties.”

• Approved pay raise for Nathan Bohlman – Road Department to $17.36/hr. He has passed two certificates for the Sanitation District. Pay raise puts him in line with operators and mechanics.

• Approved payment in amount of $26,375 to Bank of New York for second floor of courthouse annex. This is next to last year of 19-year loan. To be paid by AOC.

“We expanded the horse/camping area there with water and electric hookups and LED lights on the posts,” said Adams. There are 13 camping sites for horse trailers.